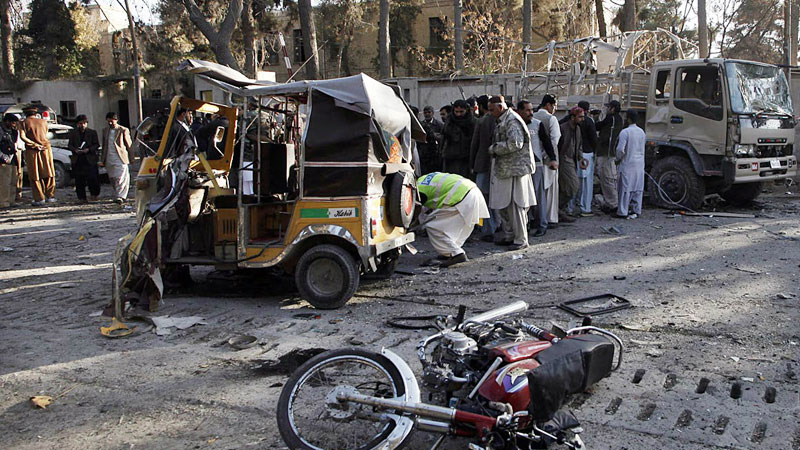 QUETTA: The Quetta Civil Hospital was rocked by a bomb blast followed by firing, which claimed the lives of twenty-five people and injured multiple on Monday.

Eyewitnesses stated that scores of lawyers were injured due to the blast. A stampede ensued after the blast took place, causing anarchy and chaos everywhere. A couple of minutes before the blast had taken place, the dead body of Bilal Anwar Kasi, the Balochistan Bar Association President who had been killed earlier in a firing incident. Sources claimed that among the dead, mostly were lawyers since several had been present inside the hospital when the blast had taken place.

Hospital sources put the number of injured at more than thirty-five. The blast took place at the external gate of the Emergency Department of the hospital. A heavy contingent of police arrived on the scene and sealed the area. Rescue teams arrived to assist the injured and shift them to another hospital for medical treatment.

Prime Minister Nawaz Sharif condemned the bomb blast and also the murder of Bilal Anwar Kasi. He directed the provincial government to arrest the culprits behind the attacks immediately and bring them to book.

“No one will be allowed to disturb the peace of the country,” said Nawaz Sharif in a statement. “The people, policy and security forces in Balochistan have given sacrifices for the country,” he added.

Peak Of Animal Abuse In Karachi: 900 Dogs Poisoned And Their Bodies Dumped In The Streets
The First Petition Under The Cyber Crime Bill Is Here- And It’s About Achari Handi
To Top