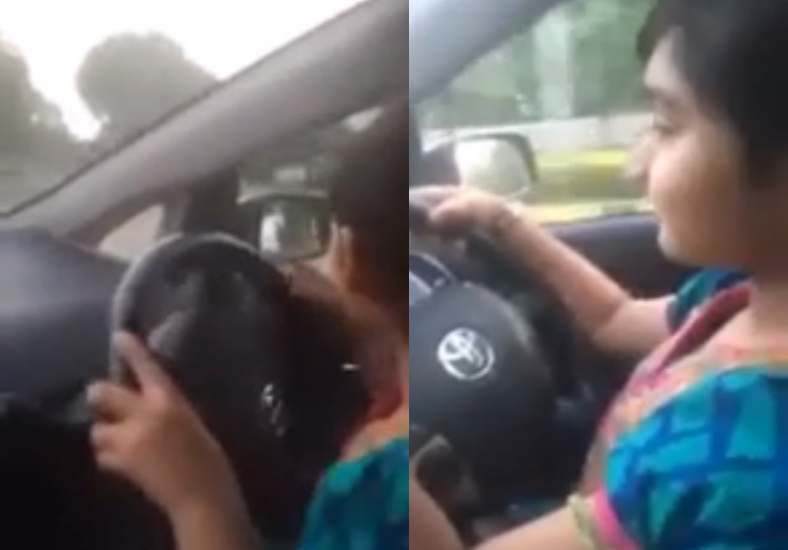 Abiding by traffic laws in Pakistan has proved to be impossible. In most cases, the challenges usually range from illiterate drivers who are unaware of the traffic rules and regulations to others who are nearly above the law. But then, on the flip side, there are parents too who let their underage children; drive. That’s right.

A video of a little girl, aged between 8-10 years old recently went viral when her mother uploaded the video of her driving a car. Yes, the little girl is literally seen speeding up to 107 km/h with songs playing on full volume, accompanied by her mother and her little brother. It seemed like it wasn’t her first time driving and has been trained well. LOL. Such a smart mother.

Watch the video to see…

It is indeed appalling to see parents encourage their children to drive who are neither old enough or authorized to do so. Sometimes, it just starts off with a short run to the groceries from a nearby shop, and sometimes it’s just to have a little drive around the block with friends.

But just before you know it, the children are given the responsibility of driving the members around if an adult isn’t available. This level of ignorance is totally unacceptable. The result of this illegal act from the people responsible is fatal traffic accidents that are now happening way too often on the streets of Pakistan.

With the rise of fatal traffic accidents, it’s high time for the parents to open their eyes and realize what is right and wrong. Underage age driving is absolutely illegal and the government should come up with strict laws against it. This not only goes for driving a car but riding bikes as well.

What do you think about underage driving? Do you think it is okay for the parents to be risking their children’s lives and others’? Is this carelessness acceptable?

Aamir Sohail Levels Shocking Criticism on Sarfraz Ahmed and Pakistanis Are Not Happy!
Who is a Woman’s True Enemy? Hint: It’s Not Men
To Top