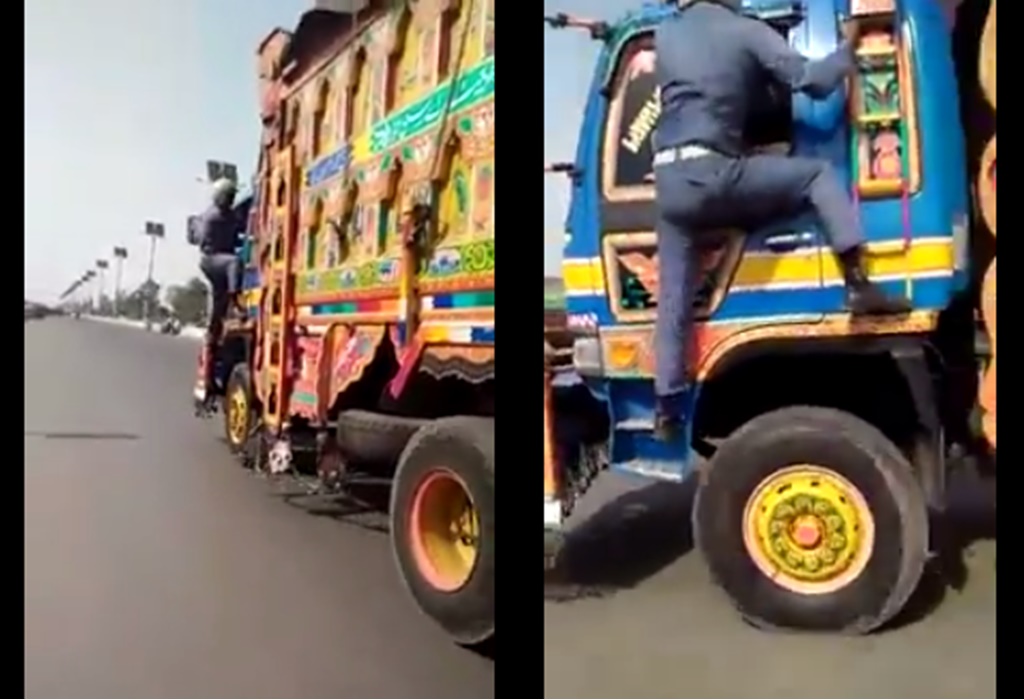 There’s a very famous norm of how Pakistanis believe or would like to believe that as soon as we are closer to Eid, the public workers such as traffic police wardens charge extra fine to the locals as they wish to make money more than the usual. Once in our lifetime, we have been fined without any reason and frankly, we can’t do anything about it.

The perception is extremely flawed and it is the generalization which prevails when it comes to our local policemen who are corrupted.

However, there is a saint in every sinner and there are good people among the bad ones. Similar to this is what can be said about this traffic police warden from Faisalabad who made sure to catch the man who was responsible for killing someone. No having any double thoughts, the traffic warden climbed to the top of the heavy duty truck while the driver continued driving it. The warden remained on top of the truck till the driver stopped the vehicle. With the help of a car which was in front of the vehicle, the truck driver stopped.

The warden alongside other people on the road started beating the driver, claiming he was responsible for killing someone!

Here’s The Link To The Video:

Pakistanis Shared Their Support For The Warden As Well!

There Were Some Who Thought This Was Not Professional

However, if you listen to the video closely, the warden kept announcing how the driver is responsible for killing someone.

Regardless what the whole story may be, it is important to understand how the warden performed the duty to stop someone who was responsible for something awful.

Once Again, Khawaja Asif Called Someone “Tractor Trolly” and Lit The Internet on Fire
8 Struggles That Only A Engineering Student Faces
To Top