Somebody Photoshopped A Picture Of The Holy Kaaba And It Is Going Viral On The Internet!

Muslims all over the world get ecstatic at the sight of Holy Kaaba, or Masjid-Al-Haram, which is situated in Makkah. The center-point of Islam for centuries, has developed and turned into a hub where millions of Muslims gather annually and periodically, to perform Umra and Hajj.

There was once a time, when the Holy Kaaba had no properties, huge buildings, five-star hotels or any other such monuments around it. It was a simple place, with simple times, people only gathering for the sake of Allah and His House, nothing else. 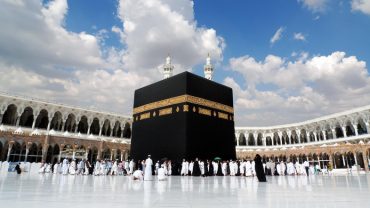 Not everybody is lucky enough to visit the Holy Kaabah, and most just glance at its pictures, and breathe sighs of relief, which come from within. A good picture posted on Twitter usually gets minimum attention, but one picture in a tweet went viral on the internet recently. The reason? It was photoshopped. Here’s the story:

I photoshopped the towers out of this pic of masjid al-haram ? pic.twitter.com/mfMw5p5bIQ

Somebody on Twitter photoshopped the towers and buildings behind Haram Sharif, as seen in the picture. Only the simple Kaabah Sharif was left, in all its beauty, with no modern structure behind it. It brought a sense and image of the old days, and people loved it a little too much. The tweet has been shared over 17,000 times with almost 37000 likes on it.

People, however, had different opinions on the picture. Some thought it was just how things should have remained, but others think it is the need of hour to make a skyline in Makkah, with hotels and towers. This is how people reacted:

Still not the way Prophet ﷺ wanted. If we are going with photoshop, someone make it like that. Those towers and hotels are a reality and necessity. Maybe not in future when they might be demolished for expansion but some nearby towers would be needed to accommodate ḥujjaj.

The issue is, it’s creating a hierarchy. The rich people get 5-star hotels with full-buffet lunches right next to the Haram… The poor people stay in dinky buildings a 20 minute walk away.

I agree hotels are necessary, but there needs to be a radical simplicity to them.

The big towers casting their long shadows on the Ka’ba is believed to be one of signs of the approach of the Day of Judgement. You just pushed the date forward.

Masjid ul Haram is a place where we go & humble ourselves before Almighty Allah. Having these towers staring us in the face is just taking away from that. Yes there is a need for hotels etc, but this blatant show of extravagance is all that is wrong with Saudi.

This eye sore made Umrah easier for my family especially my grandmother, Haram is now closer to the hotel she can go easily instead of walking alot, also my mother can leave her children in this near hotel without worrying about them, some pray in their rooms with the Jama’ah