In the unfortunate series of events, Pakistan’s metropolitan city, Karachi incurred one of the most horrifying incidents recently. An airplane of Pakistan International Airlines (PIA) crashed into a residential area with 99 passengers on board.

Since yesterday, the tragic scenes and miserable survival stories of the victims are being circulated on social media. Providing support in such a hard time, several world leaders and famous media personalities poured in their support for Pakistan. Among others, stars from Pakistan’s favorite Turkish show ”Diliris Ertugrul” stars also paid their condolences to the victims.

From Ertugrul Ghazi to Halime Hatun, nearly every character from the series showed their immense support.

Dear #Pakistan , please accept my most sincere condolences on your loss today. Praying all the souls of the departed, praying for their families and those who have survived.

Playing the role of Gokce Hatun in the drama series, Burcu Kiratli felt sorry and pain for the lives lost in the crash.

On his official Instagram handle, Celalall, widely known as Rahman from Ertugrul wrote ‘our Pakistani brothers we share your pain’. Moreover to show support in this needed time, the actor even changed his display picture to Pakistan’s national flag.

Not only the cast but, the mastermind behind the exceptional drama series Mehmet Bozdag also paid his condolences on the crash. To make a gesture, the screenwriter posted a supportive message in Roman Urdu on his official Instagram account.

”I’m deeply saddened for the PIA flight from Lahore to Karachi that crashed during landing. I’m praying for those passengers who lost their lives in this plane crash. May Allah give patience to the families of the deceased. From the core of my heart I pay my condolences to the government and the nation of Pakistan”, Mehmet Bozdag wrote.

The lead character Ertugrul Ghazi played by the famous Turkish actor Engin Altan Duzyatan also poured in his concerns. ”I pray for Pakistan”, his post ended. 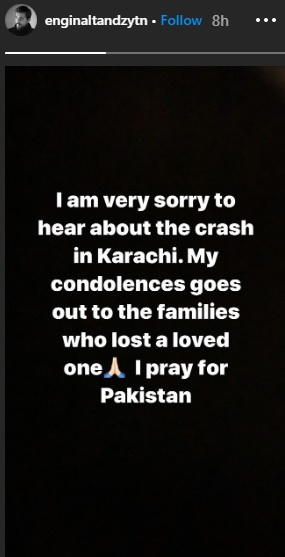 From the Diliris Ertugrul Alps, Dogan Alp, originally known as Cavit Ceten Guner also consoled the chaotic situation. Further, he prayed for ‘rehmeet’ for the passengers who lost their precious lives. 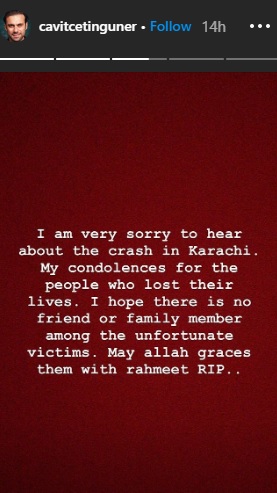 Lastly, Bamsi Beyrek (Nurretin Sonmez), an important part of the series constructed his support in three phrases. Speechless on the incident, the actor wrote, ”Am sorry”, ”condolences” and ”sharing the sadness”.

While the majority of the world stood firm with Pakistan during this hard time, Indians reacted in the most insensitive way. From joking about the tragic situation to throwing filth on Pakistan, the heartless Indians cheered it all. Well, our prayers go out to the families affected by the deadly plane crash and may the injured recover soon.

What do you think of the incoming support from Turkey? Let us know in the comments section below!

There Was No Looting Of Plane After The Crash In Karachi
Did You Know Singer Zoheb Hassan Was Supposed To Be On The Crashed Plane!
To Top