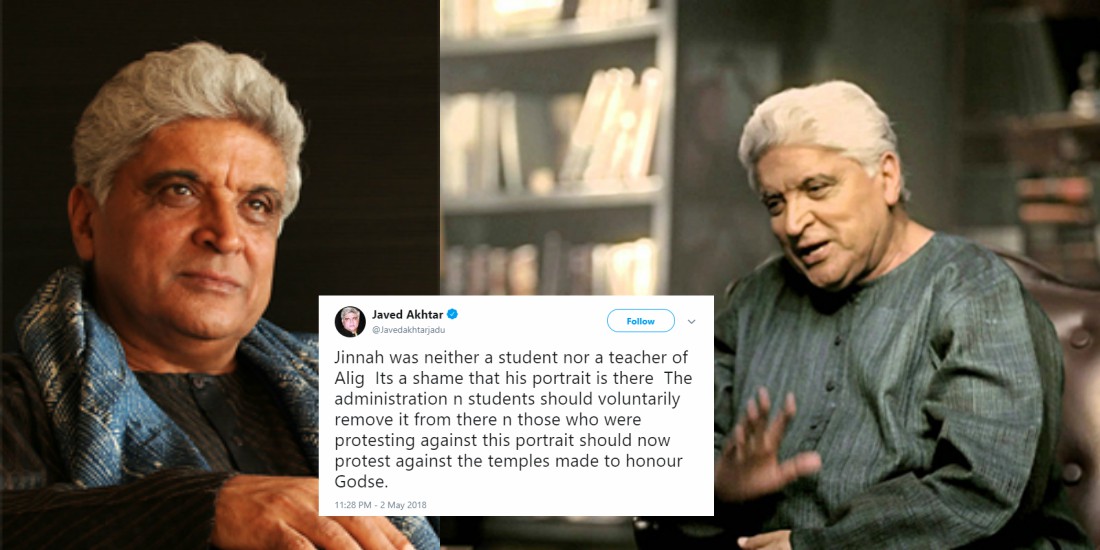 Javed Akhtar is famously known for his writings in Bollywood and Urdu literature. Javed Akhtar is an Indian born poet, lyricist, and screenwriter. Javed Akhtar belongs to the wing of people in the sub-continent who opposes the act of partition. And by partition, it means the separation of India into two parts as India and Pakistan. Many people including Indians and some very famous Pakistanis were against the partition for many reasons to be.

But now, it clearly seems like the talk of past or this topic is only brought to the surface when people talk about failed politics and how this one act in history was one of the biggest migration to ever take place. Javed Akhtar tweeted something that has offended a lot of historians and journalists from all over the world.

Jinnah was neither a student nor a teacher of Alig Its a shame that his portrait is there The administration n students should voluntarily remove it from there n those who were protesting against this portrait should now protest against the temples made to honour Godse.

Javed wrote that Jinnah’s portrait in Aligarh is a shame since he was neither a student there nor a teacher. Plus, he added another person in tweet allegedly comparing Jinnah to Godse, who was a right-wing advocate of Hindu nationalism and assassinated Gandhi.

There is no need to put jinnah and godse in same tweet, it called monkey balancing. U want to talk abt godse tweet one more…But when u indulge in secular tweeting it makes ur comments less important…And as third person tweet looks more like whataboutery.

Another famous Pakistani journalist had something to say in response

Godse was a murderer. Anyone who has soft feelings for a communal assasin has no place on my thread or in my company. Trust me @EnlightenedA1, you are anything but 'enlightened'.

Well, some are really offended! But abusing is never a right thing to do

Nope. Partition was the collective failure of all to reach a consensus. Yes, Jinnah shares the blame but so do others. Nor did Jinnah 'want' anyone dead. Godse wanted Gandhi dead. Intent matters.
Like I said, Jinnah and Godse cannot be compared. Godse was India's first terrorist

It is sad that people in power and fame exploit their authority to speak when this could be used for many better things. The collective outrage of people against Javed Akhtar’s tweet is due to his whataboutery for the fact that he wanted Jinnah’s portrait to be removed but to take it on a light note he added Godse’s fact to the notice. Seems like his act has gone wrong and now he has to face a hell lot of outrage! Good luck with that!