Pakistan army comes to the rescue of the people of Karachi following a heavy spell of rain yesterday, they have started relief and rescue operations in various parts of Karachi.

According to the ISPR, the army engineers boats are employed in various areas to shift the stranded people to safer places. Meanwhile, cooked meals are being provided to the affected population struck due to heavy rains. 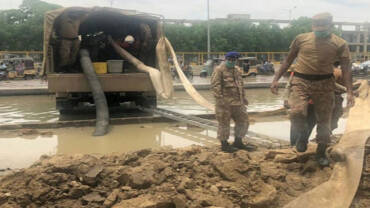 More than 200 families are isolated on rooftops due to flooding in Malir Nadi, Kohi Goth, and Dur Muhammad Goth.

Meanwhile, Pakistan army helicopters will be flown to rescue these families after weather clearance and rain in Karachi. Moreover, machinery is being used to stop water flow from Malir Nadi by refilling the breached area. Water in Malir Nadi has reduced and backflow from Quaidabad to Malir Nadi has started.

#COAS directed karachi Corps to step up flood relief operations to assist affected people due to recent rains in interior Sindh and #Karachi. “Troops must reach out to affected population in distress and extend all necessary care”, COAS.

Karachi has been submerged in rainwater again as showers in the city began in the early hours of Tuesday. The Pakistan Meteorological Department (PMD) has predicted moderate to heavy rainfall in the city. The current spell of rain will continue till today as per the Met office.

According to reports, at least three people have died in rain-related accidents in Karachi yesterday. Normal life came to a standstill in Karachi.

The rain started at around 4am on Tuesday in several areas of Karachi and continued to disrupt life in the city.
Soon, images and videos on social media showed almost the entire sunk in water.

Karachi right now! 👇😥@BBhuttoZardari – ENOUGH is ENOUGH! Either do something for #Karachi or tell PPP to LEAVE Govt. 😠#KarachiRain#KarachiRains #KarachiSinks pic.twitter.com/MpFcvFAw7W

“The unsafe use of electric equipment in stagnant, or rainwater can cause accidents, illegal power connections are also deadly,” added the KE spokesperson. There were reports of power outages from various areas of the city.

The incompetent officials of Karachi left its residents at the mercy of the heavy rains literally. Meanwhile, the performance of the Sindh government has been pathetic in giving any relief to the locals.