India and Pakistan holding a rival background apart from the rest of the world, at times have served as the last pint of table talk. The dragging of relational assistance, drawing everyone’s focused approach towards both the country’s heated stance has resulted in the loss of millions of lives since the separation times. Under consideration of the recent barbarism undermining the Indian Occupied Kashmir (IOK), Pakistan has the most important standing and the international forum has been eyeing on it for so long.

Modi Sarkar’s atrocities against Muslims since the early 2000s!

In 2002, the extreme killings of Muslims in India’s Gujrat by the recently re-elected Premier of India Narendra Modi showed the actual face of inequality prevailing in the country against the Muslim community. As Jammu and Kashmir (J&K) has a disputed posture regarding Pakistan and India’s taking over, India has always deployed its atrocities under Modi Sarkar’s leadership. 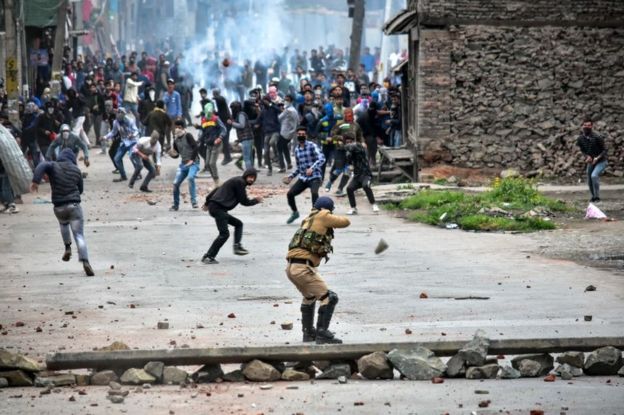 Currently, the sheer melancholy that has been spread by Modi sarkar in Jammu and Kashmir (J&K), there’s a huge debate among the masses. The world is now feeling Adolf Hitler’s existence after witnessing the unsettling similarities between Modi’s Bharatiya Janata Party (BJP) and Hitler’s Nazi Party. Not just in both the party leaders gestures but the decision taking approach also.

The @BJP4India is an offshoot of RSS! A party which takes its inspiration from Hitlers Nazi Party. @narendramodi is another Hitler rising from the East. Those who have suffered from the #Holocaust must take serious measures to stop this insanity by Modi Govt #SaveKashmirFromModi pic.twitter.com/Pst9j0LjMe

The freakishly same stances between India’s Narendra Modi and Germany’s Adolf Hitler has taken the digital audience by storm.

Follow down the exact same similarities between India’s Modi and Germany’s Hitler!

1. Back in 1920, Adolf Hitler founded the Nazis Party having a decisive agenda against the Jews. The party came into form on 24th February 1920 providing inspiration to the same violent thinking Indians resulting in the formation of an integral wing. Hindustan created Rashthiya Swayamsevak Sangh (RSS) on 27th September 1925 to implement the same idea as Hitler. Narendra Modi’s Bharatiya Janata Party (BJP) is a political wing of the same RSS.

2. Calling back some dreadful pictures from World War II, the military branch of the Nazi’s Party named Waffen-SS fought along with the German Army providing them for a strong support system. Likewise, the Indo-China war was fought by the Indian Army but with the meaningful help of Rashthiya Swayamsevak Sangh (RSS).

3. Adolf Hitler’s Anti-Jews campaigning and the violent stances taken against the Jewish nation; the bloodshed of hundreds and thousands of jews shook the world. In recent times, the same stance is implemented by Narendra Modi against Muslims and the world has witnessed and is still seeing the Anti-Muslim upholdings in Kashmir.

4. The Bharatiya Janata Party (BJP) and the Nazi’s Party even share the same theory and have the same goals. The Nazis wanted to eradicate the Jewish people while the BJP is after the Muslims. Hitler’s “Greater Germany” and Modi’s “Greater India” are the ones relating to their vicious though apprehendings.

6. Gesture plays an important role in making an impactful sign and lastly, both the party leaders Adolf Hitler and Narendra Modi have the same way of saluting. Bent hand, kept on the chest and tightly straight, this is how both the leaders provide their show of salutation.

Check out: The UN Is Finally Intercepting India’s Evil Plans Of Altering Kashmir’s Status And Modi Should Beware!

These signs are making everyone crazy over the fact that Narendra Modi and his BJP is following the Nazi footsteps. The genocide going on in Kashmir is also a total act of terrorism imposed on Hitler’s vile flagship.

What do you think of the similarities? Let us know in the comments below!

Meet Mahoor Shahzad – Pakistan’s First Ever Female Badminton Champion Who Made It To The Top 150 In The World!
Arslan ASH: Journey To The Pinnacle Of Global E-Sports!
To Top