Quratulain Balouch Got Bashed on Calling Imran Khan an A**hole 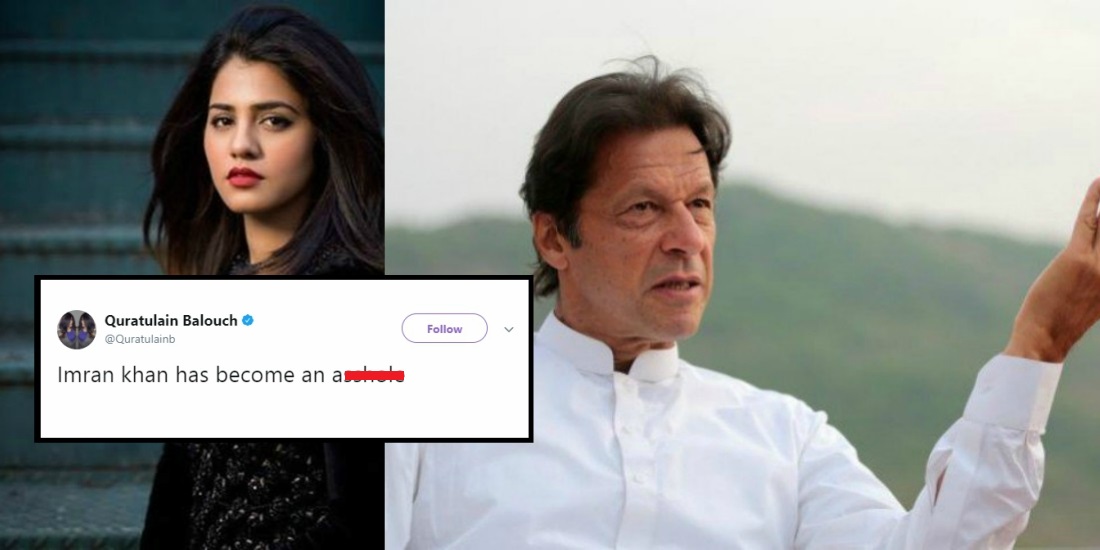 In a nutshell, Pakistani politics is no less than an Indian drama where every character lives 100 plus years while adding more tragedy. But who would have thought that PTI would also be playing a lead role in getting more TRP? If it didn’t ring any bells then let me take you back to the bad old days where Ayesha Gulalai accused Imran Khan of continuously harassing her since the past four years. Seconds after these words came out of Ayesha Gulali’s mouth, the social media was already filled with long paragraphs to prove that Imran Khan for sure is not at fault. The fiasco of Ayesha and Imran kept everyone stick to their television screens as with every second, came a new statement that sparked a new debate.

It all kept getting more and more rage with every passing second, but Imran Khan denied all the accusations. Plus, Ayesha also refused to empty her party seat. Although just like every other political war, this also got dirty when Ayesha Gulalai’s sister, Maria, who is a brilliant squash player, was dragged into it. But moments, before everyone thought it’s all over, a reality check,] came our way when an amazing singer, Quratulain Balouch, called him an ‘Asshole’. The star quote tweeted a video by Al-Jazeera in which Ayesha Gulali claimed that PTI’s social media team provoked people for violence and convinced them to throw acid on her or even murder her. No one expected it from QB which is why many replied by hate comments saying that it’s very rude of her to judge someone over an act that has no reality to it. While on the other hand, Ayesha Gulalai appreciated Al-Jazeera for shedding a light on this serious issue at hand.

HARASSMENT IS A CRIME IF PROVEN WHICH IS WHAT PEOPLE SAY

SOME STOOD FOR IK!

Yes he's because he has sacirified all his personal happinesses for fools like us , founded Asia's best privare cancer hosp for poor people of Pakistan , founded Namal College for Poor people giving Degree of Bradford !!

WATCH YOUR WORDS WHILE EXPRESSING YOUR EMOTIONS

SOMEONE EVEN DRAGGED HER SINGING CAREER, HERE

that's even worse than "Laal Meri" ??

NO ONE SHOULD USE SLANG, AT LEAST

What a load of Rubbish. If you want to be biased abt someone without any evidence, you better be prepared for the backlash.
Oh! and please dont play the women victim card

SOME TRIED TO MAKE A POINT

Wow, you are abusing someone to support women empowerment but isn't there any such thing as men's rights? You can openly target a man without any proofs and play with their reputation? What gives you this effing right? What a shame you've turned out to be.

SAD REALITY OF EVERY WOMEN OF PAKISTAN

That’s just a glimpse into what women go through everyday. Keep it coming!