The issue of harassment in Pakistan has a very sensitive side to it, but no one can compete with the side that Sharmeen Obaid Chinoy showed us in the past few days. It was a rare phenomenon of someone harassing you through a friend request on social media, that makes the victim an epitome of mazloomiat.

Sharmeen started by spreading awareness about the incident her sister experienced through tweets. She shared an incident of her sister who got a friend request from the doctor that treated her in the emergency at the Agha Khan University Hospital.

HERE IS HOW IT ALL STARTED

As a result, it stirred a debate on the social media, that got everyone involved in this call for harassment.

This is how Sharmeen Obaid Chinoy's younger sister got harassed by a Doctor… pic.twitter.com/NlPkVbz04g

Even the celebrities were shocked at such words coming from a personality like Sharmeen, who received an Oscar in the past her documentaries including Saving Faces. Hence after all this controversy, she might be saving her face as well.

How about girls sending friend requests to guys?This is a perfect example of misusing the woman card,there's a reason it's called 'request'!

PEOPLE USED TO LOOK UP TO HER

But most importantly the doctor was fired within the 12 hours. On the basis of the tweets, the hospital questioned the doctor’s credibility and immediately took action.

Reportedly, the father of 4 kids was fired and his name was not disclosed. The hospital, however, did release a notice.

BRING THE DOCTOR BACK

Allah ko hazir nazir jaan kar…..got a call from a senior AKU board member who asked me to share this. Those so…

Nevertheless, no one can stop you from doing good when you are right and that’s what happened with the doctor. Maybe because he didn’t have any such intention like it was portrayed.

WITH MANY BELIEVING THAT SHARMEEN EXAGGERATED THIS, JOBS TO THE DOCTOR ARE OFFERED

He recently got offered a job from Hashmani Hospital and London Clinical Courses with a reputable salary.

PROVISION IS IN THE HANDS OF GOD 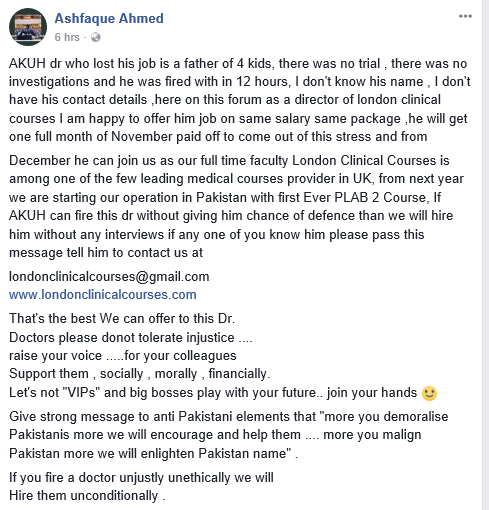 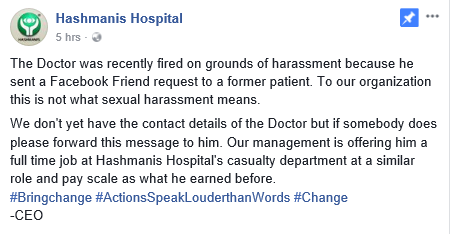 13 Signs That Tell Your Relationship Won’t Last Forever
After Sharmeen Obaid Chinoy, Ushna Shah Speaks Out Against Harassment
To Top