Protesters Outside Neuplex Jauhar, Karachi Harassed By the Cinema Security for Protesting Against Teefa In Trouble 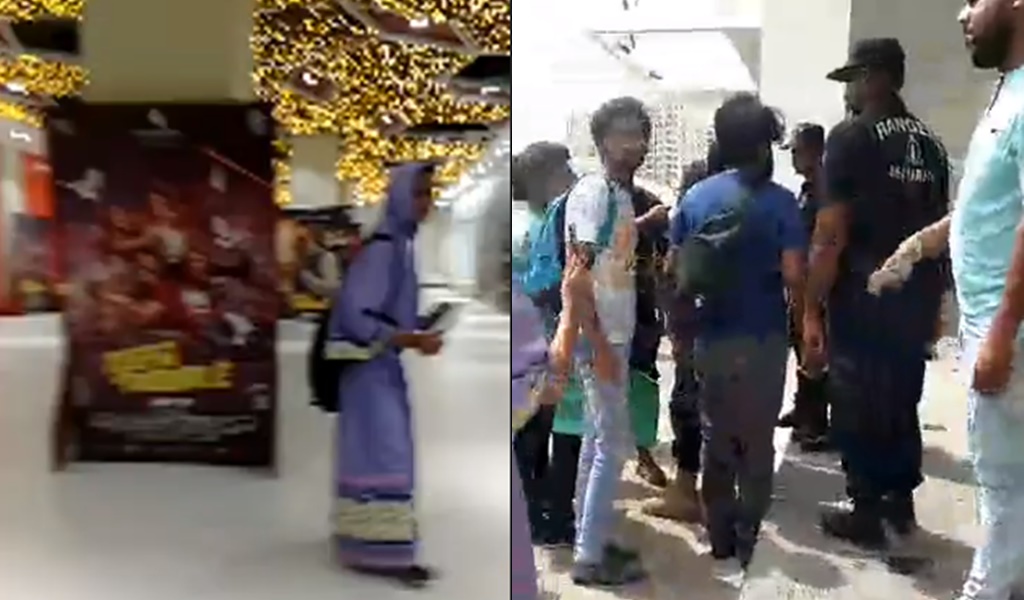 Protests against Teefa In Trouble are happening outside major cinemas in Pakistan. A few days ago, protesters blocked Ali Zafar’s way to his promotional activity for Teefa in Trouble at KFC, Karachi. The protesters believe in the sexual harassment claims made by Meesha Shafi. The actress and the singer came forward under the #MeToo movement and shared how Ali Zafar harassed her, and urged how he needs to be held accountable.

With the claims made by Meesha Shafi and Ali Zafar’s recent activities, such as hiring paid PR to tweet in favor of Ali Zafar and showcasing how he wanted the song of Faris Shafi to be moved down, many believe Ali Zafar is guilty.

The Protests Started In Karachi Outside KFC

This happened during the promotional activity before the release of the film.

Ali Zafar was supposed to do a promotional event for his film at KFC. When he reached, this happened. pic.twitter.com/142oh3acDO

Later, Another Protest Took Place Outside Neuplex, Defence In Which Feroze Khan Stood In Support of Ali Zafar

Feroze Khan claims he’s been taught much by the predator Ali Zafar. Last night it was interesting to see that in action (on video) when he seemed to be flipping off ??a bunch of protesting kids while simultaneously yelling ‘respect, respect’ – he has learned well. #MeToo

fuck ali zafar fuck feroze khan for defending him and asking for "RESPECT" respect for what? being a sexual predator? dumbasses like waleed zaman making jokes about sexual harrassment. fuck everyone supporting that film y'all are disgusting ass apologists for a shitty person.

Yesterday In Lahore, Peaceful Protests Were Held Outside Cineplex, Lahore

The creative director of Bareeze Waleed Zaman shared how he supports the sexual harassment of women. The video went massively viral as well, showing how privileged men in Pakistan are never really held accountable for their disrespectful statements.

There’s a protest outside Cinestar Lahore against sexual harasser Ali Zafar’s movie Teefa. Waleed Zaman, son of Bareeze’s owner, creative director of Kayseria brand, walks in saying “we support sexual harassment of women” Privileged men who think they can get away with anything. pic.twitter.com/2Ld7erccZP

This video shows that there were peaceful protests happening in and outside the cinema, till the security of the cinema intervened, abusing and harassing the protesters.

Upon Speaking to One of the Protesters, Here’s What Happened:

“Ammar Mirjat shared that the peaceful protests were not damaging the property or putting the cinema at any harm. However, the security of the cinema pulled their weapons out, threatening to upon fire. The police, on the other hand, took the side of the protesters and tried to protect them at all costs. The Rangers also intervened and tried to call down the matter effectively,”

Ammar further shared that all of the protesters unarmed – the only thing they had in the hands were the posters. Yet the security continued threatening them.

“Our mobiles were confiscated. Any evidence of the treatment that took place by the security of the cinema was removed from our phones when they took them from us,” Ammar shared further.

Shocking to see the security forces threatening the unarmed protesters this way.

This Guy Shares His Terrifying Experience Of Traveling From Sadiqaad To Lahore In A Daewoo
This Young Pakistani Guy Just Released His Election Rap-Song And Qasmay, You Need To See This!
To Top