People are being warned to look out for automated phone calls pretending to from their bank or card company, after a spike in scams. Recently, an incident occurred which was so true to believe but actually wasn’t.

There has been an increase in scam calls these days who ask for personal details from the people and later misuse them. A citizen shared an incident where he received few calls from the [fake] State Bank of Pakistan.  The caller ID was State Bank of Pakistan (SBP) with their logo and the caller said he was calling from the investigation department. The person also got a call from his bank’s official helpline number.

All the details seemed so legit that it was hard not to believe it. Still, this man intelligently tackled the situation and didn’t reveal his personal information to the fake caller. Later, he called his bank who confirmed that they never make calls to the customers from the helpline number. They also warned him not to share his information with anyone.

“I just received two calls. One was from State Bank of Pakistan [the caller ID was State Bank of Pakistan with logo]. The caller said he was calling from the investigation department. He also told me the govt wanted to verify my account. He asked if I use internet banking. He said I will receive a message from my bank which I did from 4250 with my username for internet banking,” the man shared the incident on a Facebook page.

“Then I received the second call. The number showed 111 111 425 which is bank helpline. He kept pressurizing me to give info regarding my account. I flatly refused because I was told by the bank that they never call from the helpline number. He threatened me that all my accounts will be ceased because it is a high-level international investigation. After some time he got frustrated and hung up. I called the helpline and they confirmed that they had not called me”.

It was a smart move by a responsible citizen. He has shared his experience in social media to beware people from any mishap.

There are more such incidents which happened recently where fraudsters are trying to access people’s personal information through different means. 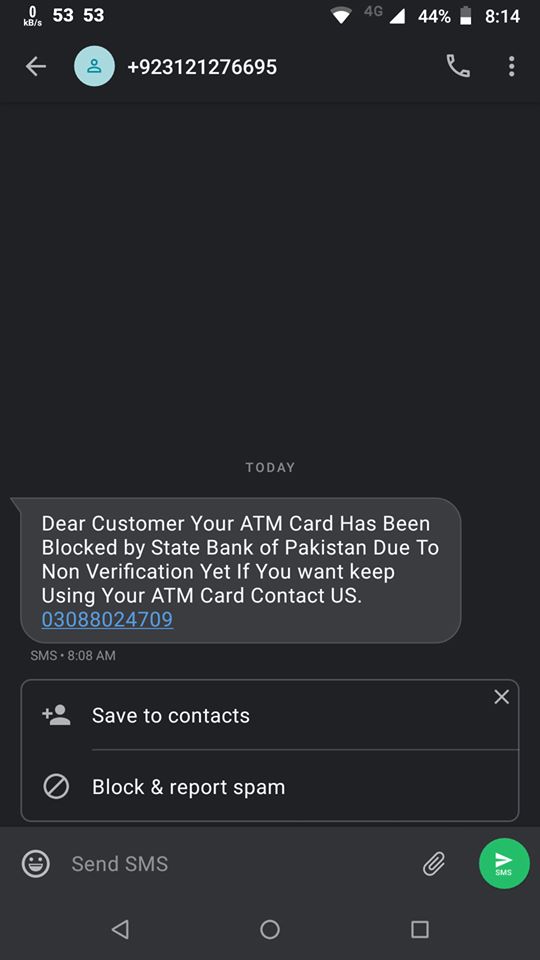 Also Read: This Guy Received A Call From Fake ‘Pakistan Army’ Scammers And His Reactions Were Priceless!

Earlier, the SBP has taken notice of these fake calls and caution people against it.

The central bank said that in many cases money transfers being done through fake calls by masking the official helpline or registered numbers of banks. The receivers apparently believe that the call is genuine or from the bank and share their personal information [including bank account number, ID, password, CNIC number, etc] resulting in loss of funds even during the calls.

The fraudsters generally impersonate as officials of SBP, army officers or representatives of superior courts of law. In this context, the SBP has advised the public to immediately contact their banks on their registered numbers themselves instead of responding to the incoming calls and sharing their credentials.

Impressive Move! Punjab Police Recruit First Transgender In The Squad
Sehar Shinwari At It Again! Accuses These Two Activist As Anti-State Amid PTV Scandal
To Top