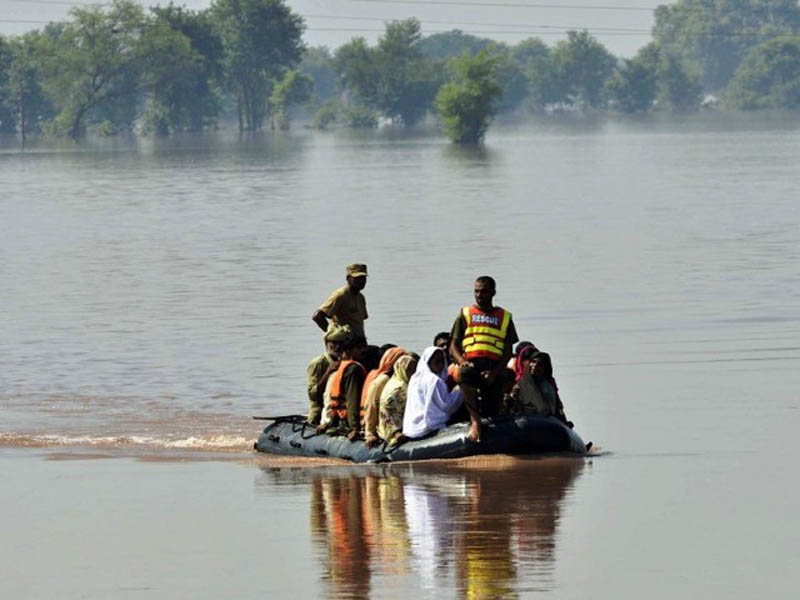 ISLAMABAD: As floodwaters move downstream through Punjab, Multan and Muzaffargarh are under serious threat of flooding in the next 24 hours.

To save the cities from the swollen Chenab River, explosives have been planted to blow three strategic dykes to divert the floodwater away from Muzaffargarh and Multan.

The army is monitoring important installations and headworks in Multan while the cityâ€™s Corps Commander is directly overseeing the situation. All schools in the area are also closed for the next two days.

Prime Minister Nawaz Sharif also visited flood-hit areas of Forward Kahuta in Azad Jammu and Kashmir, where he was informed that rainwater has not caused any damage to basic infrastructure of Neelum Jhelum hydel project, however, trade and bus service to Indian-administered Kashmir is suspended due to the calamity.

The premier was told that floods have destroyed 15 big and 175 small bridges in the area while Muzaffarabad-Chakothi road is temporary closed. Turkish Prime Minister Ahmed Dawood Oglu also spoke to PM Nawaz and expressed grief over the losses caused by floods.

Announcing the release of relief packages worth Rs100 million to each district affected by the monsoon rains, Punjab Chief Minister Shahbaz Sharif said that it was the governmentâ€™s prime responsibility to evacuate stranded people. He said people were removed from most of the flood-hit areas.

The provincial chief minister, while speaking to media in Chiniot, said three helicopters were being used for carrying food and medicines to flood victims.

Finance Minister Ishaq Dar also directed National Disaster Management Authority (NDMA) to start assessment of damages in the flood-affected areas and told all concerned authorities to provide realistic estimates of the damage caused before any rehabilitation work is undertaken.

He further told NDMA to inform the public about losses caused to life and property in Azad Jammu Kashmir (AJK) and Punjab to direct relief efforts to places where it is most required.

Further, NDMA said 257 people were killed and more than 1.1 million affected â€” a figure that includes both those stranded at home and those who fled after the floods hit.

The ISPR said that the army is continuing with itâ€™s relief work in Athara Hazari, Jhang, Chiniot, Ahmadpur Sial and Pir Kot, adding that the army is using seven helicopters and 100 boats for rescue operation. Further, the army has distributed 35 tonnes of food among the flood victims.

Tsunami Headed Towards Karachi as Karachiites Have No Evacuation Plan
After the death of 257 people, Nawaz Sharif finally visits the flood – hit areas of Pakistan
To Top