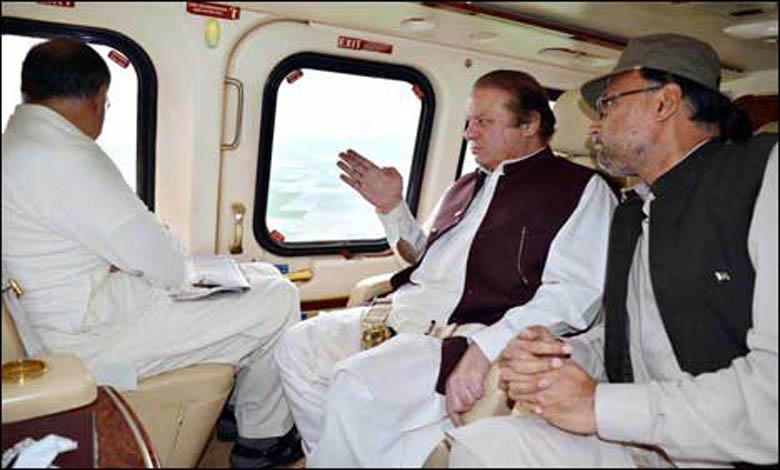 MUZAFFARABAD: Prime Minister Nawaz Sharif visited flood-hit areas of Azad Kashmir on Thursday, assuring he would not leave flood victims stranded in their hour of difficulty.

Monsoon rains continue to wreak havoc in Punjab and Azad Kashmir, killing a total of 257 people, according to the National Disaster Management Authority.

â€œIt is the responsibility of the government to help flood victims,â€ the premier said, while talking to residents of Forward Kahuta, Azad Kashmir, after conducting an aerial surveillance of the damage caused by floods in the area.

â€œWe will ensure development in the region,â€ Prime Minister Nawaz promised, announcing that several development projects would be undertaken in Muzaffarabad, including a railway network.

â€œA hospital will be built in Haveli and a road network will connect Haveli to Rawalakot,â€ he announced, adding, â€œPakistanâ€™s government will pay for these projects.â€

The premier further declared that a university campus would also be built in Azad Kashmir.

â€œI want Azad Kashmir to become an exemplary state and want to increase tourism and agriculture here as well as develop industries.â€

The prime minister also said the floods were â€œunexpectedâ€ and took everyone by surprise. â€œOur experts had no knowledge of the floods either,â€ he proclaimed.

Further, the premier said the issues of provinces should be resolved within the provinces themselves and expressed his desire to pass Kashmirâ€™s budget in Muzaffarabad instead of in the federal capital, Islamabad.

Promising a visit to Azad Kashmir again, the premier took this opportunity to bring up the ongoing sit-ins in Islamabad led by Pakistan Tehreek-e-Insaf and Pakistan Awami Tehreek to overthrow his government.

â€œAfter resolving the issue of sit-ins I will come back to Muzaffrabad,â€ said Nawaz, adding, â€œPakistan cannot afford negative politics.â€

Nawaz also said the Pakistani nation should focus on Kashmir as well. â€œPeople of Azad Kashmir are as important to me as those of Pakistan.â€

“Multan, Muzaffargarh Next” – Says Pakistan Floods
All Peace Makers Were Killed, Imran Khan Is Another: The Assassination of Imran Khan.
To Top