Many have bashed him for the wrongdoings he did. Many have mocked him for what he did in the past few days. Many have made memes out of his words when he was in pain. What many of us did not do was to believe him when he did something that restored our faith in humanity.

Last year, Waqar Zaka was applauded for his one effort which itself was a lesson to many.

Visiting Aleppo, Syria wasn’t the first Waqar actually lived on the edge and did something out of the ordinary. In 2015, he visited the war inflicted Burma. Without any fear, without any NGO sponsoring him and without giving his decisions any second thought, Waqar Zaka did what many of us never dare to think of.

While many of us diverted our attention to all the negativity that stemmed regarding Waqar Zaka these past few weeks, we had forgotten how he showed us a ray of hope when he kept his life at stake and gave smiles to many in Syria and Burma. To recognize the efforts we didn’t remember, Pakistan’s Father of Atomic Energy, Dr. Abdul Qadeer Khan recognized Waqar Zaka’s efforts and valued them by awarding Shaheen Gold Medal of the Nazariya Pakistan Council. 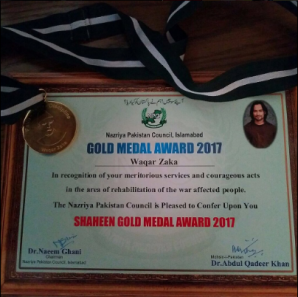 Honoring his efforts of social services in war-inflicted areas, it truly seems like Waqar’s contribution towards international social services created an example for many.

Congrats @ZakaWaqar, we are all so proud of you! you are an inspiration to all of us#ThankYouWaqarZaka pic.twitter.com/8Jl5UUqmgW

After coming across this news, Parhlo got in touch with Waqar Zaka and here’s what he shared with us:

“While I was in Syria and Burma, nobody over there knew that I am a celebrity. I was an ordinary human there and anything could’ve happened to me. You should only have faith in Allah and you have to seek for practical solutions. Just by tweeting or adding a status on Facebook won’t fix the situation. If I can use my own money to go to these areas, people can also make efforts in resolving conflicts which take place in their neighborhood.” said Waqar while giving a message to all the readers.

Further, Waqar told Parhlo that, “Do not use social media just for the purpose of gossips. People even claim to call me an Illuminati. ‘Waqar Zaka is not a good man. Waqar Zaka is a devil.’ but you people are good people. Bring out the good in the world. No NGO or TV channel supported me. Whatever I did, I did on my own.“

We are all too busy calling out different names and accusing Waqar Zaka based on all the rumors we hear about him but never do we pay any attention to the efforts he did by leaving all the comfort and risking his own life to do something better for this humanity.