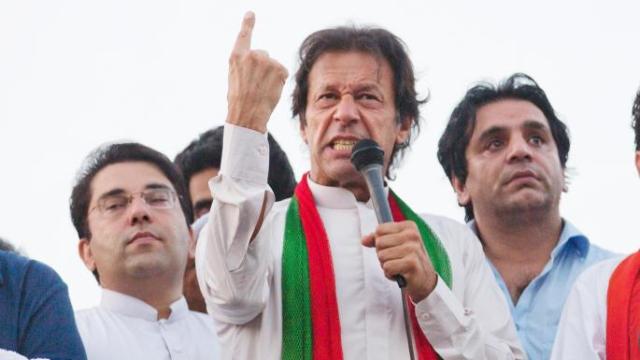 2 days into the general elections and everyone is pretty geared up. With this elections bound to make some history, Pakistanis are invested fully and in high spirits as well. With the revolutionary decisions against former prime minister Nawaz Sharif and Co., Imran Khan indeed is the one who has the most on his side in this year’s elections.

With all the focus on Imran Khan, people have started noticing a lot about him lately as well. From his remarks on the opposition to his actions – from the claims made regarding him by Reham Khan to his interviews, Imran Khan has received a lot of criticism and support in the recent days.

However, lately, Pakistanis are talking about his ‘violent’ actions towards his party members because they have been caught on tape.

Imran Khan slapped his own candidate from NA-31 today.

I’ve seen at least 3 different videos of Imran Khan shoving, slapping and hitting his workers and MNAs. What is wrong with this violent man? So much for educated leadership. Naya Pakistan, aik thappar ke saath.

Shahid Khattak, On the Other Hand, Tried to Clarify What Really Happened

Let me state it loud & clear. Opponents will try their best to express their fear of failure in the form of fake propagandas against us. Imran Khan is my leader and he has put his confidence in me. There was cloud & dirt & I couldn't see if Imran Khan is before or after me.

And He Had a Response For Reham Khan As Well!

Yes, your head is misted over animosity for your ex husband. Live in gratitude to my beloved leader and ideal who brought you today in a position that your such tweets earn too big amount of money from Panama convicts and national criminals. Grow up please & live in truth. https://t.co/b5KFnjTEhn

With the Passage of Time, More Videos Continue Surfacing On the Internet

Our wishful future pm & #PTI chief @ @ImranKhanPTI working hard for equality in the country. He loves his workers and kicks them by heart #Shame pic.twitter.com/TFF2MM4UXE

During his Tour To Karachi, Imran Khan Slapped a Party Worker for a Mistake he Made

The incident took place on the stage where Imran Khan was about all set to address the locals.

Some of the videos where Imran Khan is hitting his own party workers. Included @sufisal's photo at the end as that too constitute torture. There are more instances but 2:20 limit khatam ho gayee. pic.twitter.com/r6gzyrCEQ1

Thank God Imran Khan isn't corrupt and is only physically violent and slaps people around him.

Apparently Imran Khan kicking someone is a greater threat to this country than a party killing innocent women and old folks in Model Town Lahore. Logic dies with political support.

Imran Khan greeting a supporter who walked up to him: pic.twitter.com/MMi54lV0n3

Well, let’s see if Imran Khan talks about this in any of his tweets or at a talk show. For now, just two days left for the final day!