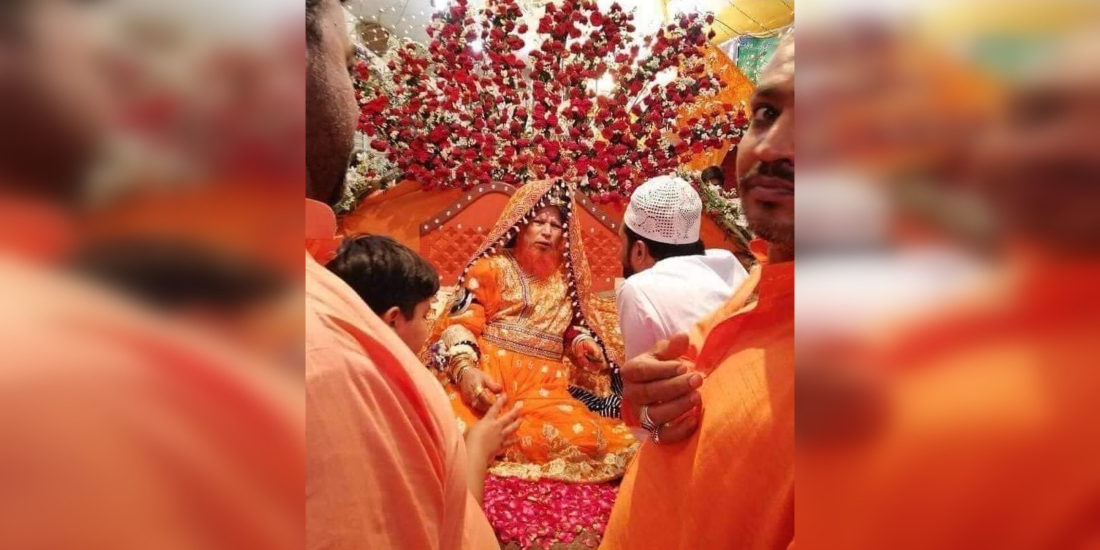 Pakistan has seen many frueds in the name of religion. Such are people who open up a business to loot money from people by emotionally blackmailing these people in the name of God. Many peer and farkir who claims to be closer to God than any normal human. So, since they have a higger value in the eye of God they charge money from the one who are not.

Many people not just in Pakistan but all over the sub-continent are badly tangled into this trap. They are helpless to this culture of going to a peer to ask them to pray to God on their behalfe.

Another such incident surfaced the internet a few days back when Facebook was flooded by this photo of a man of an older age. Where the said person is wearinng a bridal dress and all dressed up with mehndi and jewerlry. He claims to be the bride; not an ordinary bride but “God’s bride”. People on ther internet were disgusted by this post and the reality hit hard that someone has gone this far to defame the religion.

Here’s more to it

“Can followers of a kaffir cult really believe that their peer baba has married Allâh Almighty?!?

According to the belief of Fanafillah, a holy baba dissolves himself with Allah if he performs the marriage with Allah.

In fact, the famous story of Allah ki Dulhan is mentioned by Ala-Hazrat in his books where a peer baba is approached by a group of people to request Allah for rain.

Peer baba goes out of his house, shows both of his hands full of bangles (an indication of a bride) towards the sky and says “Oh Allah send rain, or take your bride away.”

Allah is pure and is above of all these filthy attributes Sufis have ever ascribed to Allah.

How can the Ummah prosper when it has the people who attribute filth to Allah?

How close we are indeed to the Day of Judgement!”

The photo itself speaks, the peer and followers are in complete syncronization

Dulhan Peer from pakistan.Can people seriously be so stupid in pakistan?Can followers of a kaffir cult really…

It was good to see people uniting through this post. All the muslim were united to bring this peer down. The peer’s act has hurt many Pakistani’s and other muslims. Maybe it is a wakeup call for all the muslim’s on how things like these are not accpetable anymore. Let’s unite and call such scammers off.

First Episode of Pepsi Battle of the Bands Is Here and This Band Already Gets a Standing Ovation! ?
Some People Believe Jeremy McLellan Is the Son of Imran Khan and His Reply Has Won People Over!
To Top