Stop Illicit Cigarette Sale In Pakistan and Save The Youth|Parhlo.com Smoking, a very common but dangerous habit. And the illegal cigarette trade in the country has made it so much easier for the youth to get into smoking at a very early age.

There are laws present, according to which a hawker cannot sell cigarette or tobacco sales within the 50 meters of the educational institutes. However, the hawkers are not only breaking this law but are also causing loss to the national exchequer.

According to research by Oxford Economics, the illegal trade of cigarettes is causing a loss of 44 billion rupees annually to the national exchequer. Taxpayers’ life can get a lot better if the government is able to recover this amount.

Recently Hamza Shafqat, the Deputy Commissioner of Islamabad started a campaign. This campaign checks the sale of illicit (illegal) tobacco, sale of cigarettes near educational institutions. Meanwhile also checks the enforcement of tobacco control laws across the country. 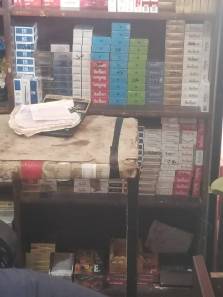 This is a picture from G-10 Markaz in Islamabad

The DC Islamabad raided at all the areas where cigarettes are being sold and fined many who were selling illegal cigarettes.

This drive beginning with the capital city with the aim to stop the trade of illegal cigarettes that are easily available anywhere even around the educational institutes. Some statistics tell us that Tobacco use kills 160,000 Pakistanis every year. While hundreds of underage kids start smoking every day. A stall on Murree road in Rawalpindi displaying illicit cigarette

The reason that has been identified is the easy access to tobacco. This drive should not only remain in the capital but also should be carried in the other cities too like Karachi which is the hub of the country. Also even after the campaign drive against illicit cigarette sale in Islamabad, there are many places still selling those cigarettes.

The Tax Stealers And Payers

There are many local tobacco companies operating in Pakistan. Some of them are not paying taxes on their total production. While only the two multinational companies are paying the major chunk of the taxes.

Prime Minister Imran Khan, in his 100 days of government speech informed that 98 percent of the total tax collected from the tobacco industry is paid by the two multinational companies. One is Philip Morris Pakistan Limited and the other Pakistan Tobacco Company. While local manufacturers pay the remaining 2 percent of the tax.

This clears the fact that local manufacturers are not paying the taxes on total production. Or you can say they are under-declare their production to steal tax. While some of the illegal cigarettes are being smuggled inside the country that also doesn’t contain the pictorial warning.

As mentioned earlier this is not only causing a loss of 44 billion rupees to the national exchequer but also destroying youth by giving them easy access to illicit or illegal cigarettes.

What To Do As A Citizen?

Do you want to save the young generation? And help the government fight the illicit trade of cigarettes inside the country? So now, whenever you see a hawker selling cigarettes within the 50 meters of the educational premises. Or anywhere without the pictorial warning. Note that they are selling illegal cigarettes. And report them to the local administration or put it up on social media.

Hence, in this way, you will be acting as a responsible citizen. And your actions will not only save youth from starting smoking but also help the government make revenue.

Pictures of Amal Muneeb, Aiman & Muneeb’s Daughter, Have Gone Viral And The Couple’s Not Happy!
The Future Is Here: Careem And PIA Join Hands To Ease Up Travel And Convenience!
To Top