Shahid Afridi Stuns the World With his 42 Ball Century Comeback 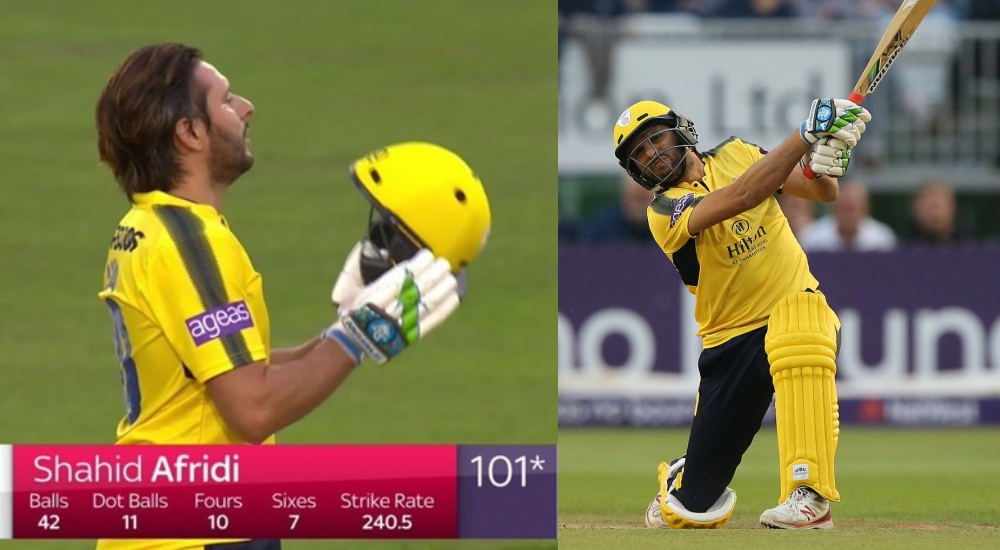 Shahid Afridi is a man who can surprise you anytime, anywhere and when nobody had any expectations from him after his retirement, he proved everyone wrong. He scored a century off 42 balls and left everyone, including his haters, speechless. There is no doubt about Shahid Afridi’s class and talent, but it had been a while since we had seen such belligerent batting by him. He scored this memorable century in the NatWest T20 tournament playing for Hampshire against Derbyshire. Shahid Afridi really stunned the world!

He still has it in him.

Boom boom lights up #NatwestT20Blast with a sensational knock! ?
What an incredible innings, @SAfridiOfficial.
Picture via @SkyCricket pic.twitter.com/cVxHbvsZwm

The incredible knock was his first T20 century and it took him only 42 balls to get to 101 runs. This is Afridi for you. It rained sixes and fours, and the innings included 10 fours and 7 sixes. This really was the vintage Afridi we all like to see.

And he came in as an opener.

Afridi going for a century at 200SR, while batting as an opener. What year is this?

Okay, we really find it hard to believe that this is 2017. Shahid Afridi coming in as an opener, thrashing the opponent with his bat hitting sixes and fours and scoring a century? Nope, this is not going to happen every day.

People may criticize him for not being consistent, but one should never doubt is capability, because he always proves this to the world that he is here to stay and that form is temporary and boom boom is permanent.

Hate him all you want. But when he lifts his arms up in the air like this with a bat in his hand? You know he has done something great. pic.twitter.com/WSNhL0Jgcu

It was the second fastest T20 century by a Pakistani. The record for the fastest century is held by Afridi’s ex-best friend Ahmad Shahzad.

2nd fastest century by Pakistani and at age of 37. He isn't giving up pic.twitter.com/HEMrniYWBt

He really isn’t giving up. It really makes you happy when you see him smiling, with his arms aloft in his signature style. Afridi has always been a legend and he always will be.

We really hope that he continues to perform and keeps amazing us for the rest of his cricketing career. A career which still is definitely going to last for 12 more years at least.

Let’s Take a Moment to Appreciate how Perfect Ali Zafar Is!
Pakistanis Reminded Hareem Farooq of Akhrat on her Picture with Osman Khalid Butt, but her Response is Worth It!
To Top