Shahid Afridi, the legendary player of Pakistan cricket has once again spoken about India. Afridi after getting recovered from the COVID-19 virus spoke to sports anchor Sawera Pasha. In the interview, Afridi said the Pakistani cricket team dominated the Indian team.

He said, “I have always enjoyed India. Unhe to theek-thaak mara hai humne. Itna mara hai unhe ki match ke baad maafiyan mangi hai unhone” (We’ve thrashed them a lot. I believe we’ve beaten them so much that they used to ask us for forgiveness after the match).

He continued that he liked playing against India and Australia because these are good cricket teams and cricketers play under pressure. He said that playing and performing in such hard conditions is a considerable thing. Moreover, in the interview, Shahid Afridi said that his most unforgettable inning was 141 against the Indian cricket team in India.

Besides, the player got tested positive for coronavirus and many Indians celebrated his sickness. However, he recovered successfully.

Alhamdulillah, my wife & daughters, Aqsa & Ansha have re-tested after our previously positive results for #COVIDー19, & are now clear. Thanking u all for your continuous well wishes, & may the Almighty bless you and yours. Now back to family time; I’ve missed holding this one 😊 pic.twitter.com/J5mDv7DnBD

Soon after recovering, reportedly it is the first interview of Afridi in which he said the Indian team asked forgiveness from Pakistan.

Earlier, Afridi talked about the Modi government his barbaric rule in India. He condemned the action of security forces in Kashmir. He said, “I’ve been deeply humbled by all the love shown to me by the people of Kashmir. I hope that there will be a team from Kashmir in the next edition of the PSL. If there will be a team from Kashmir, I will want to play for that team.” 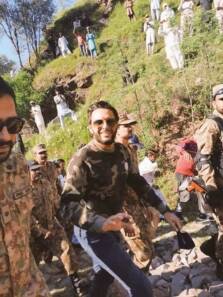 Furthermore, he also wrote on his twitter, “It does not take a religious belief to feel the agony of Kashmiris…just a right heart at the right place. Save Kashmir.”

In a nutshell, the legendary player, Shahid Afridi has always spoken the truth and did not surrender against the wrong. The Pakistani player has always supported Pakistan through thick and thin.