Almost two decades have gone by since the Princess of Wales, Diana passed away. However, even after her death, the princess continues to encourage positive change in the lives of many young people all around the world.

One of these young people that has been inspired is Raina Khan, who has received ‘The Diana Award’ for her humanitarian efforts. The 18-year-old Raina Khan, from Society for International Education, Lahore, has been recognized with the highest honor a young person can achieve for social action. 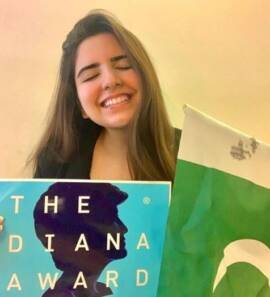 “To get my name associated with someone who is known for her work and not for her royal luxuries is an absolute honor. It means more than what it would have meant if I worked for it. I got it for the work I didn’t expect anything in return for,” said Raina while talking to Parhlo.

Being voted as one of the 50 most influential women in Pakistan is undoubtedly deserved by Raina Khan, who not to forget, is only 18-year-old. At such a young age, not only did she put her efforts into female empowerment, but she also endeavored to provide free education, take part in the field of health and hygiene, as well as put her efforts into social entrepreneurship.

The Diana Award was set up in the memory of Diana, Princess of Wales. It is the most prestigious honor a young person aged 9-25 years can receive for their humanitarian work or social action. The award is given out by the charity of the name of Diana and has the support of both of her sons, The Duke of Cambridge and The Duke of Sussex. 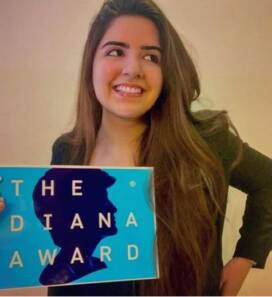 Raina Khan has earned this award for Pakistan through her eminently flattering dedication towards the betterment of the society. Being a founder and CEO of the ‘Zenana Foundation’ a youth non-profit, Raina proved her immense dedication.

She has worked alongside hundreds of fundraisers and volunteers all around the world to set up free schools, start a skill training program for women, and build an online marketplace for trainees to sell sustainable garments.

Raina does not only facilitate self-sufficiency for young girls but she also strives to promote environmental protection and sustainability.

The honoree dedicated this award to every Pakistani who has contributed to the country.

‘My award belongs to every Pakistani’

The youth of Pakistan is certainly making Pakistan’s name prominent in the world. Just recently, we were bestowed with the news of Aleha Jahanzeb winning All Asia Debate Competition. In 2016, Pakistani woman, Fayeeza Naqvi, had also won the Global Humanitarian Award. May the youth continue to make Pakistan proud!

Afghan Healer Claims He Has Found COVID-19 Cure – Kabul Warns Against The Medicine
Is Engin Altan (Ertugrul) Really Going To Be Peshawar Zalmi’s Brand Ambassdor In PSL?
To Top