Concept Behind The Initiative!

The initiative is taken in order to instill the long-lost obliterated values on which this great nation has been forged. The company had shared its motto behind this initiative on its webpage:

“We launch our campaign in a city by screening a hologram of Quaid-e-Azam Muhammad Ali Jinnah’s speech at different locations. The hologram content of the projections has been collected by various speeches of Muhammad Ali Jinnah. It is where he spoke about interfaith harmony, women empowerment, coexistence, and social cohesion. The power of memory and spoken accounts hold a large sway in the cultural storytelling context of Pakistan. Thus using an innovative approach in presenting a revered figure, making it seem life-like, ignites latent and suppressed emotions as well as fallacies that propel Pakistanis today to hate and subterfuge a chance of a pluralistic Pakistan.”

Nonetheless, the company did immeasurable research in order to gather as many historic speeches. Speeches that had been delivered by Pakistan’s founder. Moreover, the event is said to be conducted on 13th February at Benazir Shaheed Library and at the Christian Missionary School. The event will also be conducted on 14th February at Liaquat National Memorial library.

However, this activity was also conducted at different locations in Karachi, Swat. Lahore and Kasur. Through the holograph, speeches regarding religious freedom and the representation of the female gender in the society as an equal were delivered. For instance, one of the most memorable speeches of Quaid e Azam was delivered in many places: “You are free. You are free to go to your temples or to your mosques or to any other places of worship in this State of Pakistan. You may belong to any religion, caste or creed—that has nothing to do with the business of the state.” 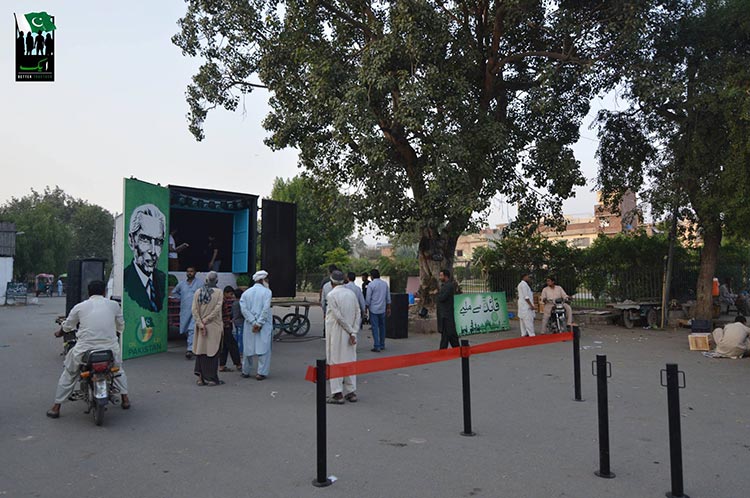 Feedback From The People?

For Pakistan, it was like the founder of this nation came alive. Though in holographic form, the idea of Jinnah giving the speech left the audience struck in awe. Besides that, other places where the event was conducted were Baldia Chowk, National Bank Chowk, and the Railway Station.

However, one recent event including this holographic technology received quiet negative feedback. The event where his tomb was lit up in similar holographic fashion was not appreciated by the people. The idea was to basically use the same concept of holograph and use it to put on a colorful display of lights at the mausoleum of Pakistan. Additionally, the idea was not liked by people and most of them bashed it on social media.

What are your comments about this initiative? Please share your insight.

Pakistan-South Africa T20 Series Might Be Played In Rawalpindi Stadium
Sara Loren To Deliver Her 3rd Jaw-Dropping Performance Of The Year!
To Top