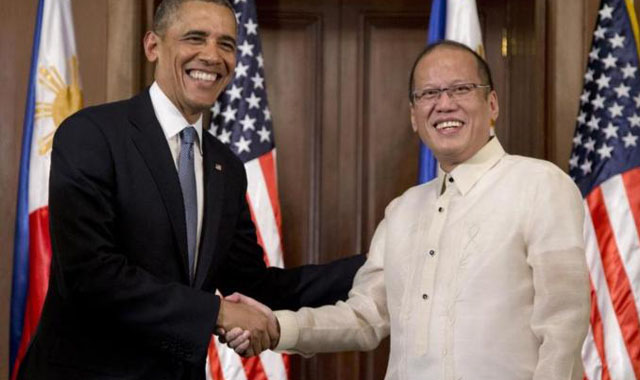 Manila – US President Barack Obama has arrived in the Philippines in a visit widely seen as a part of Washington’s “pivot to Asia strategy.”

The Philippine government said the pact was an affirmation “of the robust and enduring strategic partnership between” the two allies.

Talking to reporters in Manila, Goldberg, said that the new agreement would not allow the reopening of US bases in the Philippines, something that has been opposed by nationalist forces and is prohibited by the 1987 Constitution.

In Depth:
US and Philippines sign ten-year defence pact
No way home for Filipino ‘Amerasians’
Toxic trail shadows US-Philippine bases deal
But the agreement essentially allows US access to Philippine military bases across the country.

Senator Miriam Defensor-Santiago, chairman of the Philippines Senate Committee on Foreign Affairs, told Al Jazeera that the agreement has “marginal advantages” for the country, and is more beneficial to the US.

With the signing of the agreement, Santiago said the US “could claim that it has ‘contained’ China, because the Asian countries involved, including the Philippines, are now bound by their respective agreements with America”.

“It would make the Philippines sounds as if we are a satellite ally of America,” she said.

Anti-China sentiments have been on the rise in the Philippines, which is engaged with Beijing over disputed atolls in the potentially oil- and gas-rich South China Sea, with both countries claiming Scarborough Shoal and Second Thomas Shoal as their own.

The Philippines has accused Beijing of becoming increasingly aggressive in staking its claims to the sea, and has called on the US for greater military as well as diplomatic support.

China and the Philippines are stuck in territorial dispute
While the treaty is seen to boost Manila’s confidence in countering the Chinese power, Santiago warned that the country must be careful in handling the agreement, and avoid the violation of the Philippines constitution.

“Filipinos should keep uppermost the supremacy of the Philippine Constitution,” she said.

“We should not accommodate any foreign power at the cost of the sovereignty of our Constitution, even if the problem is presented as if it were a problem of national survival.”

Activists opposing what they call “US imperialism in Asia,” raise the question of sovereignty.

They cite a case in 2005 when five US soldiers were initially sentenced to life in prison for allegedly raping a Filipino woman, before the ruling was overturned by another court and they were set free, despite public anger.

Another issue that has spiked contempt is the alleged dumping of toxic waste in the northern Philippines, supposedly by US military ships which Washington denies.

Jose Maria Sison, the exiled leader of the Communist Party of the Philippines, and one of the top opponents of the deal told Al Jazeera that the agreement practically reopens the US bases in the country.

“The US military bases shall be practically re-established under the guise of facilities built on Philippine military grounds, with the Filipino military personnel practically serving as perimeter security guards and with the Philippine government sharing the costs,” he said.

Sison also said the US “is exaggerating the threat of Chinese aggression in order to justify its pivot to East Asia” while establishing bases in the Philippines and “at the same time claiming neutrality between The Philippines and China”.

Speaking to Al Jazeera, Dr Francisco Nemenzo, a political scientist and former president of the University of the Philippines, criticised the negotiators for concealing the details of the agreement.

Nemenzo said the deal “just legitimises what they [the US] have been doing all these years: allowing the establishment of an American base within a Philippine base, which a Filipino commander cannot even enter.

“We want to know if the deal is a blanket agreement, allowing the US to set up a military facility wherever they want to.”

Security around the capital for the two-day visit is tight, including the ordering of a no-fly zone by the Philippine government during the arrival of Air Force Once.