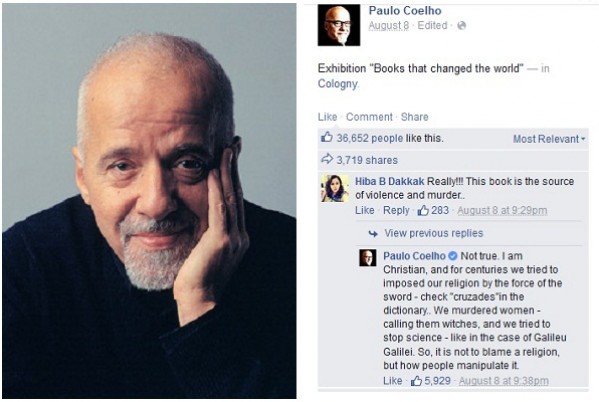 Paulo Coelho, a world renown bestselling author, has publicly defended Islam by describing the Quran, Islam’s holy book, on his official Facebook page, as the “Book that changed the world”

The Brazilian author posted on August 8 an image of the Quran on his Facebook page with a statement saying, “Exhibition ‘Books that changed the world’”.

Exhibition “Books that changed the world”

The post received major attention on the social network, gaining over 38,614 likes and more than 4313 shares, which show the popularity of the Author among tolerant people. However one Facebook user, under the name Hiba B Dakkak, commented “Really!!! This book is the source of violence and murder.” 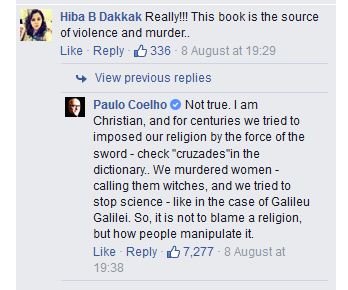 But Coelho replied by refuting her claims, saying “Not true. I am Christian, and for centuries we tried to impose our religion by the force of the sword – check “crusades” in the dictionary… We murdered women – calling them witches, and we tried to stop science – like in the case of Galileu Galilei. So, it is not to blame a religion, but how people manipulate it.”

The reply of Coelho received more than 7200 likes.

Also See: HONY Did For Pakistan What No One Else Could Do!

Shahid Afridi; Making A Difference Off The Field…
5 Things Coke Studio Didn’t Tell You About Umair Jaswal – The Vocal Powerhouse
To Top