Rawalpindi is a beautiful part of Pakistan, located in Islamabad. Not only this, but the small district also manages to have smooth roads, valleys, and a lot of greenery; which makes the place a mesmerizing haven.

However, a rather bizarre yet scary incident took place in this very safe haven; where a mentally challenged man roamed the streets freely and hurt five people.

A mentally-challenged man hit five people and fled the scene

During his stroll, the mentally-challenged man hit five people on the street at different times. One of them is in serious condition as of now, according to reports. Finally, after a lot of people gathered and captured the man today.

As of now, the man is in police custody. But we have one question in our minds. What will be the punishment of this man?

Provided the fact, that this man isn’t in his correct state of mind, he might not be held accountable for his horrifying crime. However, it doesn’t seem right to set him free either. He isn’t only a threat to others, but can also be a great threat to himself. From the looks of it, the man seems to be living in a poor state and needs immediate refuge and assistance.

A lot of people suffer from mental illness. The nation is yet again divided on how this poor man should be punished for a crime that he consciously, or unconsciously did. But what we find most unbelievable is; how much the society we live in today is deprived of emotions and humanity. 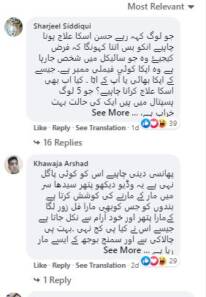 Knowing how the man is not in the right state of mind and suggesting that he be punished in such a way that other mentally ill fear of hurting others; sounds a bit absurd don’t you think?

Where has humanity gone?

It also saddens us to see how people are being contradicted and criticized for speaking against a man who is incapable of even taking care of his own self. We hope and pray for the five persons who are being treated as of now. In addition, we also hope may they get the required treatment and get well soon. Other than that, we also hope this poor man gets the required treatment and is taken care of.

Also Read: The Plethora Of Mental Illnesses In Pakistan And How Society Should React To It