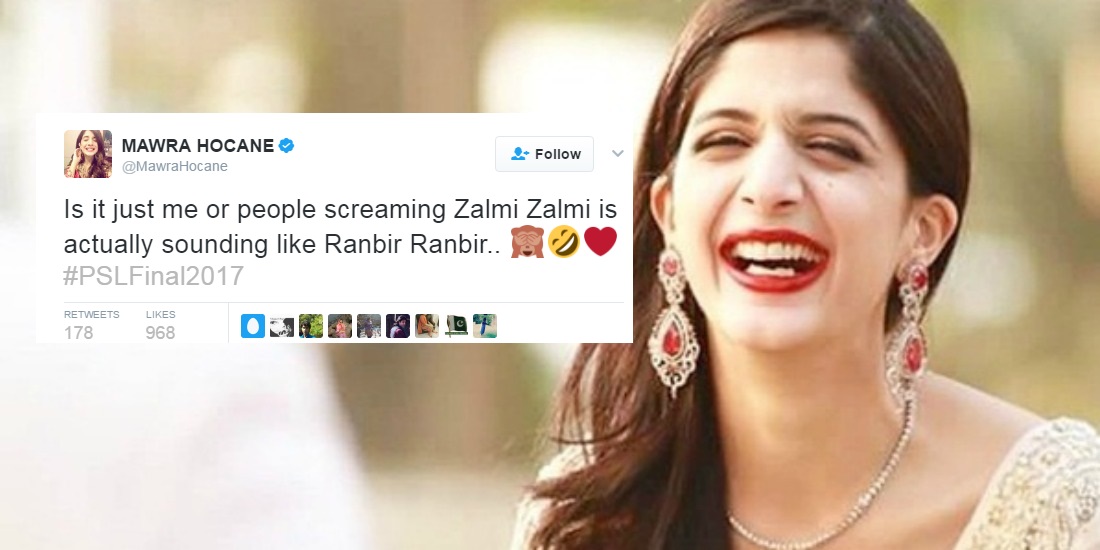 PSL’s final had everyone on their toes. Cricket fanatics from all around the world were geared to watch the finale of one of the most amazing tournaments in present day cricket. What made the final of PSL’s 2nd edition even more exciting was how it took place in Pakistan.

Zinda-dilane Lahore, alongside other Pakistanis, who traveled from different parts of the country, just couldn’t control their joy.

PSL is over, but the result is everlasting… pic.twitter.com/RUV4pxi0jm

PSL Covered everything with tribute to martyrs, promoting youngsters, nach gana, crazy cricket and most of all bringing Pakistan together.

Seeing the stadium fill up fills my heart with pride. Lahoris & all Pakistanis hit the terror out of arena. This is what I call brave people

Viewers watching the match from home were all ready to see the return of international cricket on the turf of Lahore. Seems like Pakistani actress Mawra Hocane was pretty excited about the final match as well.

She was so excited that she wrote a hilarious tweet… which seemed like a blunder later on!

Is it just me or people screaming Zalmi Zalmi is actually sounding like Ranbir Ranbir.. ????????❤ #PSLFinal2017

And the internet, obviously, forgives no one!

A Bit Too Harsh?

@MawraHocane zalmi zalmi is no where similar to Ranbir Ranbir.
Anything for attention, right?

@MawraHocane Is it just me or People screaming Hocane Hocane sounding like Cocaine Cocaine ????

I urge everyone to pray for Mawra Hocane … https://t.co/hbKf7yV28a

Is it just me or people screaming quetta quetta actually sounds like ‘shut the fuck up mawra’? https://t.co/CTa8VdiZGj

@MawraHocane i think the love/obsession u have for Ranbir is amazing! Continue loving whatever u love unabashedly. Ignore the haters

With everyone trolling her, Mawra tweeted this:

Kudos to our trolling awam for coming up with the best tweets and giving us all a great laugh. In all seriousness, these trolls are much better than seeing those who spread hatred over petty issues. Also, Mawra took the trolling pretty lightly as well.

Read Also: The Love And Lots Of Hate For Afridi: Why I Want Peshawar Zalmi To Win PSL Final In Lahore

Our Desi Gora Alan Wilkins Spoke Some Fluent Urdu And Got Us Emotional During The PSL Final
Pakistanis Witnessed The Revival Of Cricket In Their Homeland As PSL Comes To An End!
To Top