Oh well, Turkish actress Esra Bilgic becoming the ambassador of Pakistani brands continues to be one of the biggest debates. Bilgic aka Halime Sultan who plays the lead role in the drama series Diriliş: Ertuğrul has a growing fan base in Pakistan. So much so that the stardom has local brands racing to approach the glorified actress to shoot their products and services to fame. 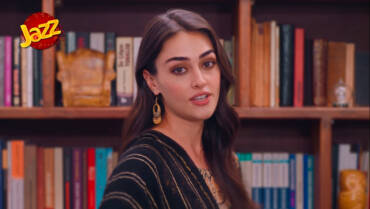 Following the announcement by QMobile, actor Yasir Hussain expressed his disappointment and anger over the decision. He made it pretty clear that he is not a fan of Turkish cinema taking over Pakistan’s entertainment industry since the beginning. In fact, even when Prime Minister Imran Khan decided to air the Turkish drama, he was very critical of it. 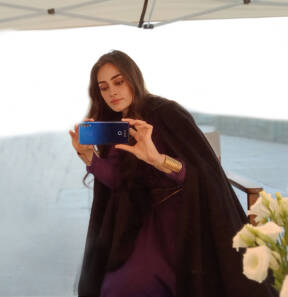 Hussain raised the question as to why QMobile did not approach Pakistani actors like Mahira Khan, Saba Qamar, and others to be their brand ambassador. In order to support his perspective, many other actors came forward to back him up. 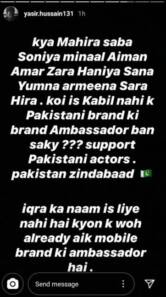 The well-known twin actresses Aiman Khan and Minal Khan agreed with Hussain’s perspective. While Aiman shared his words on her story, Minal commented on one of his related posts. Seems like they have completely disregarded the matter of Bilgic working in Pakistan. 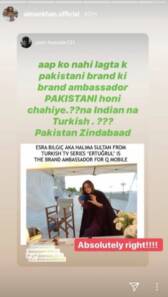 Later on, another Pakistani actress came forward with her views on the matter. Zhalay Sarhadi shared how unhappy she is with Turkish actors coming to work in Pakistan. In fact, she stated in an interview that “Hiring Esra Bilgic is a slap to our faces“.  However, she later defended her statement, as from what she had said, on could tell how strongly she disapproves of Bilgic being the brand ambassador of local brands.

A blogger brings up the hypocrisy of Pakistani celebs

Well, does this not reek of jealousy? Or is this all based on insecurities? A Gujrat based blogger highlights how these very actors who are voicing their two cents on the matter are being purely hypocrite. And as a matter of fact- she has definitely made some valid points here!

Blogger Maria Abid brings up the fact of how these same actors have no issue when Indian celebrities come to work in Pakistan. Similarly, they themselves have no stumbling block when they go across the border and work in the Bollywood industry. In fact, getting a project from India is a source of pride for them. Not only this but they refer it to as ‘art has no boundaries.’ 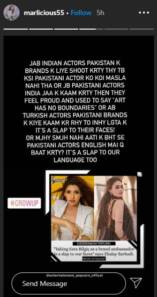 Hypocrisy, isn’t it? In addition to this, she says that now these same people think that Turkish actors being the face of Pakistan brands is a slap to their faces. Well, well, well, could this girl be any more right? But wait till you hear the most outstanding point she made here! The blogger talks about how she is unable to comprehend why these Pakistani celebs talk in English. “It’s a slap to our language too”, she said in her story. You go, girl!

At the end of the day, we can only hope this group of anti-Turkish stars end their prejudices and biases real soon. It is high time we expand horizons and relations in the entertainment industry.