A very bizarre incident took place in Gujranwala were a series of murders were taking place in the People’s Colony. The entire series of murders caused panic and worry amongst citizens. After contemplating and planning the police authorities were finally able to arrest the killer.

While talking to the media, the police informed them that the culprit Arsalan was killing people that were sleeping on the roof for four months. The accused individual is now in police custody.

His murder weapon was a brick that he used to throw at the poor people. Overall, the man killed about six people, which includes two women also.

The culprit has accepted his crimes in police custody. More details by the police state that theses serial killings took place between April 12th to August 5th. About five cases were registered about these brutal murders in People’s Colony police station.

According to reports, the killer also confessed that he used to kill women because he himself could not get married.

Although some reports state that he might be going through some medical issues or disorders that are causing him to kill people. No medical reports have reported such a thing as of yet. However, the response of why he was doing so pretty much sums up the mental and psychotic issues.

Why he did so?

While interrogating him, it is learned that the culprit Arsalan, was murdering people because of being a single bachelor. Apparently, being a bachelor can turn one into a brick-throwing murderer! In fact, Arsalan used to jump and climb on rooftops and targeted married couples

Simultaneously, another report is also suggesting that the criminal, consists of a criminal record and has been under arrest and police custody in the past. However, he was out on bail, which is questionable itself. If the person is really mentally ill, doesn’t he deserve to be treated? 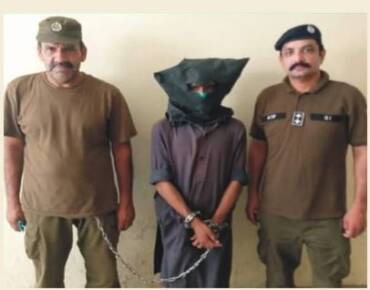 A similar incident of a mentally challenged man took place in Rawalpindi as well. Are Pakistani authorities not responsible for managing and protecting civilians against mentally-challenged people?

But if you think about it, nothing much can be said about the situation, provided Pakistan has become a country where people are supporting a killer! In the end, we hope that such crimes come to an end in Pakistan real soon.