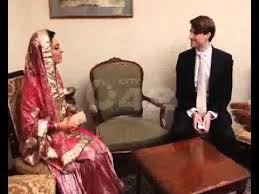 The Video shows the Nikah ceremony of Pakistan Politician Aitzaz Ahsan’s daughter with not a Pakistani man as expected but with a Norwegian Man. It shows Aitzaz Ahsan holding her daughter’s hand and accompanying her to a lounge where the Nikkah takes place. The Nikah Ceremony begins with the Islamic rituals and principles. The Norwegian man, to be the husband of Aitzaz Ahsan’s daughter, recites the ‘Kalima’ in the beginning. He formally accepts Islam and becomes a Muslim. The Norwegian man changed his religion and entered into the religion of Islam before he accepted other marriage rituals. Once he is done with the Nikkah formalities, it’s the turn of Aitzaz Ahsan’s Daughter who accepts him as her husband. The family members of Norwegian man are dressed up in the Pakistani clothes and look decent. The  members of both the familes say ‘Amen’ once the Nikkah ceremony gets over.

The video is 5 minute footage that shows the core Nikkah ceremony of Aitzaz Ahsan’s daughter with a Norwegian man. You will enjoy watching the whole process of Nikkah ceremony especially because it’s rare to find a christian man marrying Muslim woman , that too after accepting the Islam. We don’t find it happening in Pakistan much as previously it has been like the groom belongs from Pkaistan and is a muslim while the bride is an outsider an a christian.

The Marriage season is going on in Pakistan. This year hadn’t been a big year when it comes to marriage ceremonies of popular celebrities. Aitzaz Ahsan’s daughter marrying a man who was christian and changed his religion to Islam is a big news. Aitzaz Ahsan should be lauded for allowing the video to be recorded so that no suspicions take place in Pakistan regarding the marriage. It is unfortunate that we, the Pakistanis, love to spread rumors and don’t take much time to damage the character of a person through false accusations. Had Aitzaz Ahsan not shown his son in-law converting to Islam before marrying his daughter, he would not have been spared by self-proclaimed protectors of Islam in Pakistan. The public rancour would have been worst. Well, It’s good to know about the marriage ceremony of Aitzaz Ahsan’s daughter. We wish them and their family members all the best in the life.