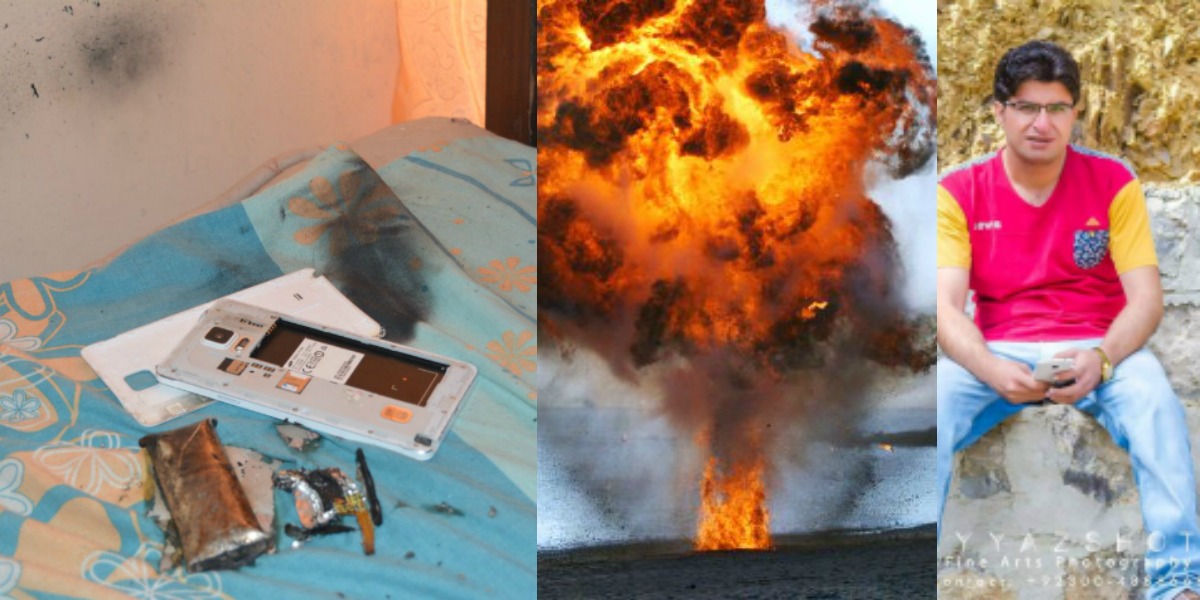 Mobile phones have become the tota (parrot) from those old-time magical tales in which the soul of an evil guy would stay and the only way to harm him was to harm the parrot. We protect our phones from all kinds of troubles and spies. They’re always with us and we try to not get them in danger.

But what if that same phone died and harmed you in return?

Something of that sort happened recently with a Twitter user Aftab Afridi, whose Samsung Note 4 caught fire while he was asleep next to it.

1.I put my mobile on charging before i went to sleep in the morning i heard blast near my ears. #SamsungRiskedAftabsLife pic.twitter.com/5iL08kOnx2

2. i thought it was some kind of bomb blast near my room. when i wake up i saw my whole face was cover in smoke. #SamsungRiskedAftabsLife

3. I unplugged the Samsung Note 4 charger from the electric board& saw that my mobile was burning on my Mattress
#SamsungRiskedAftabsLife

4. I throw my mobile and battery from my Mattress which burnt my fingers. #SamsungRiskedAftabsLife

5. Then i contact @Samsung_Pak customer care on there islamabad number but they didn't respond #SamsungRiskedAftabsLife

But some tried to figure out what was actually happening

Uhh.. because that’s what normal people do?

Why would you sleep with your cell at first?

The Sales are… BOOMING

Now Samsung washing machines are exploding.
At Samsung HQ…
"So, how are our products performing?"
"Booming, saar. Booming."

Samsung must have been taken over by isis. FIrst exploding phones, now washing machines…. https://t.co/pDWnCfg8S2

What do you think of the entire explosion situation?

Suffering major losses on the recalling of phones and now the washing machines, what do you think of the future for Samsung? Would people still buy their products?

Would YOU still buy their products? let us know!