[Video]: Hamza Ali Abbasi And Other Pakistani Artists Show Their Support To Kashmir Cause

Every day, approximately 4 to 7 Kashmiris are killed. They are not killed due to terrorism or any other unaware event – they are killed by the Indian army who try to take over an independent country. All of these aspects were highlighted in Hamza Ali Abbasi’s new video #IStandWithKashmir.

Hamza Ali Abbasi is more than just an actor – he is a bold Pakistani who doesn’t fear anyone when it comes to sharing his opinion. He actively shares his political concerns on social media and also voices his thoughts on the matter of Kashmir. After he was banned by Facebook for speaking in favor of Kashmir, Hamza Ali Abbasi continues speaking against the unjust witnessed in Kashmir, and this time, he has taken a number of Pakistani artists in his work.

A number of actors such as Humayun Saeed, Ayesha Khan, Maya Ali, Fahad Mustafa along with Momina Mustehsan and activist Muneeba Mizari speak in general terms of how, as human beings, we need to stand with Kashmir.

Highlighted in the video as well, we need to keep aside our personal and national interest while turning this into a war that is killing thousands of innocent people. Whenever given a chance, Hamza Ali Abbasi always highlights the matter of Kashmir in hope that will start voicing this concern and play their role in making this better. 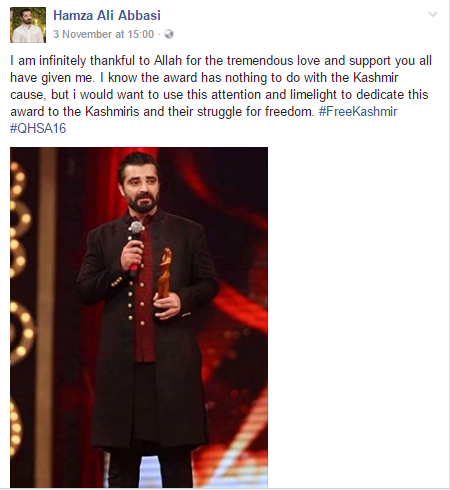 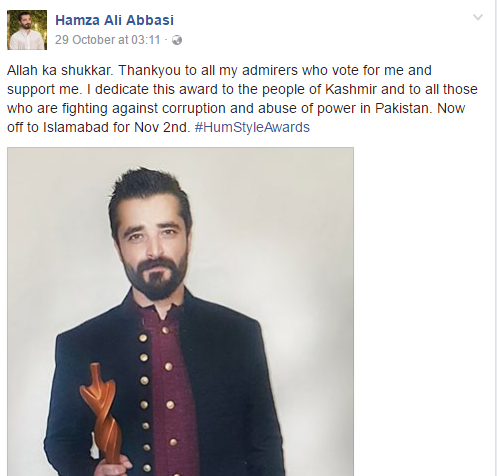 As Hamza mentioned in his video as well, we need to keep our differences aside and play a role in freeing Kashmir from these monsters. #IStandWithKashmir