A woman passed away while performing Hajj lately. The story of her untimely departure is a big lesson about the unpredictability of life. It has surfaced on social media after an Islamic cleric in the UK shared on his official Facebook page. He wrote:

A young sister from our Hajj group never made it home. SubhanAllah! This is such an emotional story and a powerful reminder. A sister who befriended her during our Hajj sent us her personal account…

I went hajj this year Alhamdulillah and I made some good friends in Mina, one of the sisters who was sleeping behind me in Mina would often come into my side of the tent to visit her friends that shared her room in Aziza. She was mid-to-late 30s she had 4 children she would talk about them.often I think they were between 15- 4 years old. She had become.very close to another sister of the same age as she and they would do a lot of things that Hajj together with her husband and the other sisters bro.

She became ill with the Hajj flu like many of us and was feeling really sickly before the flight and her friend helped push her around in a wheelchair at the airport.

She never made it home. She died on the aeroplane and they had to stop emergency in Italy. Her body is still there and they are trying to arrange a fast transport to get her to uk for the burial. Her children won’t get the opportunity to see her again, not it this world.

She died with her lap in her new hajj buddies lap. And many left that flight in tears after the news spread. The flight attendant said she had a smile on her face when she died.

She had just finished her hajj. She was sinless InshaAllah she was in high iman.InshaAllah.
Even though the trajedy left many of us shocked and not able to think about her except with tears down our faces the sweetness is InshaAllah she is going to jannah and Allah has raised her ranks InshaAllah and taken her at the purest time .

Will we be taken when we are as sinless and as forgiven as that, will the best of our actions be our last? May Allah accept every good dua she made during her hajj especially for her family and raise them to be righteous and successful in this life and then next.

We can’t wait for death to pounce on us unaware. This life might b shorter than you expect. Every day Start of thinking if it was ur last what would you do differently. The time for procrastination is over. May Allah help us all.

A young sister from our Hajj group never made it home. SubhanAllah! This is such an emotional story and a powerful… 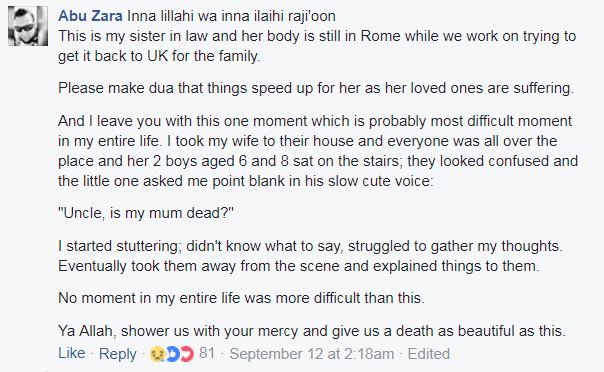 A random person shared her experience with the same woman

Let’s recite a prayer for the woman who passed away. May her family find peace and patience in this catastrophic moment.

An Army Officer Tragically Lost his Life after Hair Transplant in Lahore
16-Year-Old Domestic Worker Raped, Burned And Tortured By Employers In Karachi
To Top