Marriage, a sacred bond between husband and a wife – marking the point of making their generation and enjoying the presence of each other for the lifetime. According to the Almighty, sharing the most eloquent and moving terms leads to a natural, eternal relationship between a husband wife.

“And among His signs is this that He created for you mates from among yourselves, that you may dwell in tranquility with them, and He has put love and mercy between your hearts: Verily in that are signs for those who reflect.” (Quran 30:21)

Islam has been clear in marriage terms. A wedding must include a nikkah only and after sharing the night together, the husband must arrange a treat (Walima) for the relatives to honor the celebration. Based on the societal norms, the wedding along with the marriage has been made difficult.

In addition to holding a lot of importance in the Quran and in the eyes of Allah, the Messenger of Allah (SAWW) said, “The Nikah is my Sunnah (way), whosoever leaves my Sunnah is not from amongst me.” (Kitabus Sunan – Mishkat)

Narrated by Ibn Masud, the Prophet Muhammad (SAWW) said, “Young men, those of you who can support a wife should marry, for it keeps you from looking at non-permissible females and protects you from immorality. However, those who cannot devote themselves to fasting, for it is a means of suppressing sexual desire.” (Bukhari and Muslim)

Complications Made In and During Marriage

Based on the societal norms, the entire process of marriage has been made 10 times more difficult than one would ascertain. Islam accepts the liking of a man and a woman within the limits, of course. If a man admires the liking of a woman and wishes to tie the knot with her and vice versa, it is acceptable in Islam.

The general and very prominent misconception regarding this prevails in the society, which states and practices that men and women are not allowed to marry someone they like/love. This further narrows down to parents and elders of the family not allowing the man and a woman to talk to each other before – eradicating the process of getting to know one another before making the commitment of spending the entire life together.

“Women Have Less Freedom than Men in the Say of Marriage” – A Misconception!

The consent of both, man and woman hold equal importance and weight.

“Do not prevent them from marrying their husbands when they agree between themselves in a lawful manner.” (2:232)

Just this one ayah alone explains the choice of freedom a female has in terms of selecting a life partner. Additionally, the ayah also expresses how a woman must not be forced into marrying someone she is not willing to.

Therefore, the concept of Islam regarding giving women the freedom of choosing someone of their own choice is very clear – she must have a say in who she wishes to marry.

The Freedom Muslim Men have in Choosing Someone to Marry

According to Prophet Muhammad (SAWW): “When one of you seeks a woman in marriage, and then if he is able to have a look at whom he wishes to marry, let him do so.” (Dawood).

Seeing the woman a man wishes to marry has been allowed by the Prophet Muhammad (SAWW). This, however, does that mean indulging in activities that clearly have been instructed wrong in the Quran. 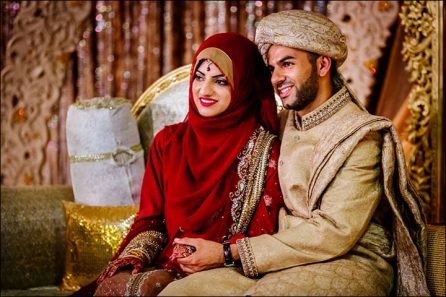 Al Mughirah Ibn Shaibah said “I got engaged to a woman at the time of the Prophet (May Allah bless him and grant him peace). He asked me “Have you seen her?” I said “No”. He said, “go and have a look at her because it is more fitting that love and compatibility are established between you.” (Nasai)

“Marrying Someone Based on the Liking of Parents/Elders ONLY” – A Misconception!

The concept of selecting a spouse for marriage is very instructed in Islam. Based on the norms of the society, we have complicated the concept of selecting someone we wish to marry. “Big house in a posh area, excellent salary, 2-3 cars” and what not. Due to this, the elders deny the proposals of someone you may wish to marry and use the misconception of how parents/elders hold the entire say in choosing someone.

In the light of Islam, character, their spiritual involvement, and their purity matter the most.

In terms of the hadith, the Prophet Muhammad (SAWW) said: “A woman may be married for four reasons: for her property, for her rank, for her beauty, and for her religion (and character) so marry the one who is best in the religion and character and prosper.” (Bukhari)

It is essential for parents and their children to comply with the saying of Quran and Prophet Muhammad (SAWW) in terms of marriage. Leaving the societal norms aside, these need to be allowed and must be practiced for making marriage easier and acceptable.

At the end, in the light of Quran and Sunnah, the notion of the man and the woman matters the most, for they are the ones who will be spending their lives together.