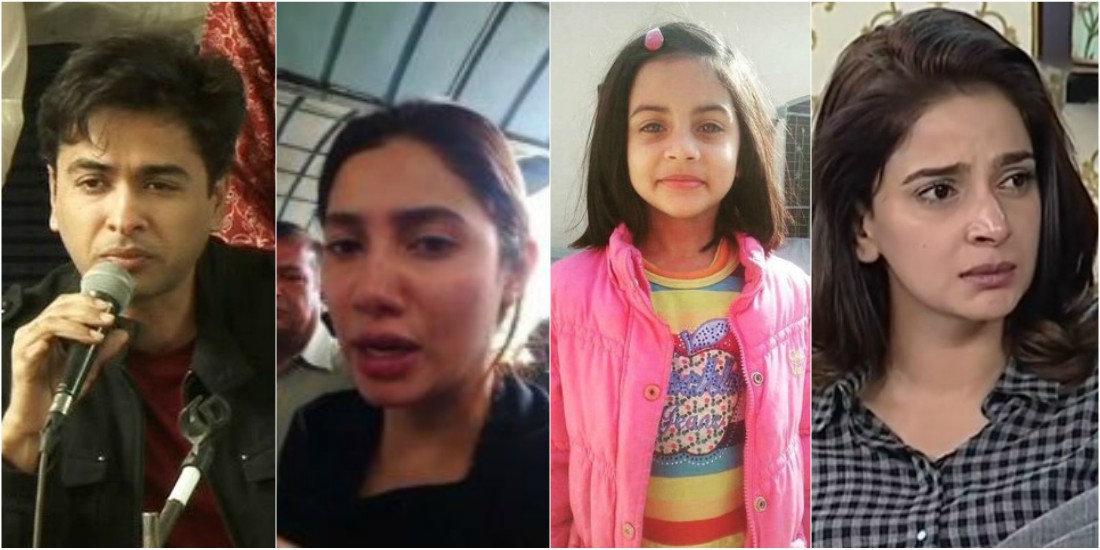 Last 2 days have been devastating and not just Pakistan but everyone in the world who heard the news is saddened and demand justice. On Tuesday an eight-year-old girl was found murdered on Tuesday after rape from Shehbaz Khan Road in Ghandra area, five days after she had gone missing under mysterious circumstances.

The reported rape and murder of a minor girl in Kasur has resulted in anger and grief countrywide.

In this regard, the artist community in Pakistan came to the forefront to protest against the brutal rape and murder of a seven-year-old Zainab in Kasur. Mahira Khan was present along with other actors at the Karachi Press Club to speak against the issue of child abuse. Mahira Khan called upon those in power to act and deliver justice not only to Zainab but all those before her as well.

#Championing CHILDREN’S RIGHTS #MahiraKhan stresses the IMPORTANCE of creating awareness about abuse! At the peace protest at the #KarchiPressClub against the injustice face by 7 year old Zainab! #Justice4Zainab #TimeIsUp #SpeakUp #NowOrNever #JusticeForZainab #HumanRights

Even Saba Qamar could NOT stop her tears against the MONSTROUS injustice faced by 7-year-old.

Hamza Ali Abbasi actor and TV anchor also expressed his deepest regret and anger over the incident and deplored the silence of the administration every single time an incident like this happened and questioned the occurrence of child abuse in the society. He discussed this serious issue in his TV show and different guests from political parties also condemn and speak out on this heart-wrenching incident in Kasur.

Here is the video link. Must watch this!

Shahzad Roy discussed how we could eliminate these incidents by awareness. Such barriers should be broken down.

Here is the video of discussion…

After Watching this video let me know if you have the courage and not embarrassed to share the thoughts you had during the 10 seconds pause I took. #Talknow pic.twitter.com/Bkl0SI9Qjr

Pakistani children are living in the dark because we treat this education as taboo and shy away from it. Parents don’t like to talk about the most important aspects of society. Which needs to become an important part of education, it leads to self-defense and protection.

We hope that the authorities are able to arrest the attacker and such incidents don’t take place in future. #Talknow