Amid the lockdown, people are not really ‘locked down’ in the country. A recent viral video depicts a guy wearing a fake uniform of motorway police, getting caught red-handed, that too, with his girlfriend.

Reportedly, the guy allegedly with his girlfriend was roaming on a motorway. However, the real motorway police apprehended him. When the police asked basic information from the person who was impersonated as a motorway police officer could not give a satisfactory reply.

Following this, the motorway police apprehended him and interrogated the culprit:  Officer asked, “What is your name?  the culprit replied “Mohammad Tayyab”. “Do not you know it is illegal to wear a Police uniform?”, asked the officer.  “I do sir”, Tayyab replied. “Then why did you wear it? the officer inquired.” “I have made a mistake”. said Tayyab. 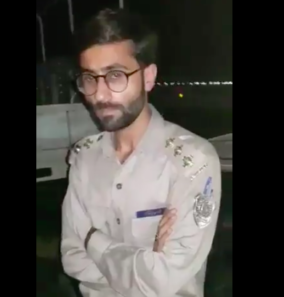 “What do you do?” the officer asked.  Tayyab replied, “I work with private contractors”. “Where were you going?”, the officer questioned. “I was going to drop her at Battah chowk, he responded.”

In the video, Tayyab’s girlfriend could be seen as well

In the above video, the girl can be seen clearly, who seems quite anxious and dismal. The police officer asks the girl “do you know this guy”, she nods her head. Moreover, the policeman told the girl “we have contacted your mother she is on her way.”  The police officer told the girl “we are taking him to the police station.”
However, to protect her identity, the video has been edited and the girl’s part has been removed by our team.
At one end the whole of Pakistan is locked down due to the coronavirus pandemic; on another hand people like Tayyab roam around freely in disguise.
People on social media reacted to the video of the alleged couple

Thank god he is not an “engineer”

Viral on Tik Tok too

The police caught Mohammad Tayyab. However, things will not be the same in their life anymore. Pakistani society does not appreciate the relationship between girlfriend and boyfriend. The guy named, Tayyab will bear the brunt of his fake disguise as a motorway police officer.