Pakistan: How the ceremonial occasion is wasted into blood and disease? - Parhlo 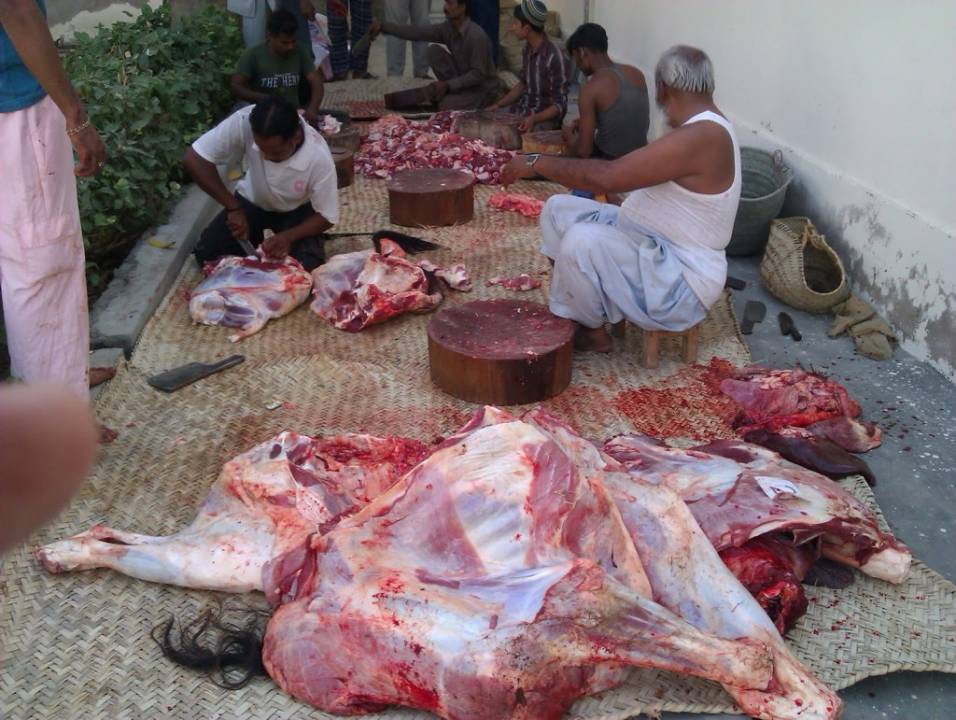 As the Eid comes close, people rush to cattle markets to purchase the sacrificial animal that fits in their budget and fulfills their religious needs. Same thing happened this time around as cattle markets were seen full of buyers, sellers, and animals.
Apart from cattle markets, we found sacrificial animals everywhere including on streets, amenity blocks, and in every nook and corner where people walk in less than often.

Animalâ€™s presence was found everywhere. It was usual that with animals presence must be their fodder and waste materials that gave us constant polluted smell. The neighborhood started to appear like a village; the city looked dirty. It appeared that we are living in farm where smell and polluted air is pervasive. As expected, the health standards and hygiene were least to be seen and sensed. After all this is what makes our country conspicuous as compared to others.

According to relevant source, more than one million animals were sacrificed in Karachi. The colossal number of slaughtered animals required equally colossal steps to ensure health and hygiene. We didnâ€™t pay any heed to these factors and our government, as always, refused to take responsibility.

There were no free grounds allotted by government for animals to be kept, fed, and secured. As the result, cautious people as we are, we took responsibility to keep them close to ourselves. So, we chose streets, empty plots in residential areas, and our houses to keep animals making ourselves prone to diseases and insanitary.

We remained ignorant to fact that keeping animals in our homes makes us vulnerable to deadly diseases such as Congo virus. It may result in death in worst cases. But this is less harmful than to the point when the real game begins. I mean the â€˜slaughtering phase.â€™

The spirit of celebrating Eid ul Azha dies the moment after the slaughter takes place. We forget about the waste materials and throw them off to the convenient places. If we give it a thought, thousands of tones of animal waste is dumped on the streets and nearby places. After all, who cares, what happens to the waste as long as we enjoy the meaty Bar-be-que at our homes.

We donâ€™t realize the animals waste becomes the feed for various animals such as cats, dogs, flies, insects, and rats and this is where the proliferation of diseases occur. While it is the responsibility of the government authorities to collect waste material and dispose of at safe place, we remain ignorant of government ineffectiveness. So, people shouldnâ€™t take responsibility off their shoulders and take care of animal waste on their own.

Other muslim countries such as Saudi Arabia, Malaysia, and Qatar exemplify the slaughtering process and animal waste management carried out in a hygienic surroundings. Health conditions are taken care of. People are provided with places where their cattle and goats are fed and kept secure. The slaughtering on Eid ul Azha, itself, is facilitated by the government. However, in Pakistan, itâ€™s totally opposite. Moreover, people lack civic sense to ask for these facilities by government.

This Eid-ul-Azha brought us more of blood and slaughter than satisfaction of essence of sacrifice. I, personally, was aghast at sight of blood flowing across the streets and waste remains of animals being covered with flies and insects. I couldnâ€™t eat meat because the image of bloody-streets crossed by my eyes. I couldnâ€™t stop imagining the impact that will leave on our younger generation.

We are already engulfed in bunch of huge problems such as theft, robbery, target killings, and other means of murdering people, we donâ€™t want people to get adversely affected by inadequate hygiene and health conditions on Eid-Ul-Azha. However, Iâ€™m optimist. we are big hearted people eager to work for betterment of humanity. We need to take responsibility to address hygiene issues on the occasion of Eid-Ul-Azha. By working our way through communities or neighborhood, we can organize the slaughtering process which ensures healthy environment and hygienic conditions for people and sacrificial animals. We all have a civic sense; we just need to use it through cooperation and coordination with others.

If not of yourself, think of your children and future generations who wonâ€™t be able to do much after seeing bloody streets, stinking air, and pervasive unhygienic slaughtering procedure once this practice is internalized and accepted by the government and the people. Taking responsibility and few simple steps can bring back the essence of sacrifice on Eid-ul-Azha. You, surely, want to spend clean, hygiene, and happy Eid-ul-Azha with you family and friends. Cleanliness embodies the happiness. Eid-ul-azha without the both is charmless.