Former Prime Minister, Nawaz Sharif even after brandished with disqualification continues to travel everywhere like an emperor. You cannot keep count of vehicles in his security convoy and it mirrors the idea of standard security provided by the state. 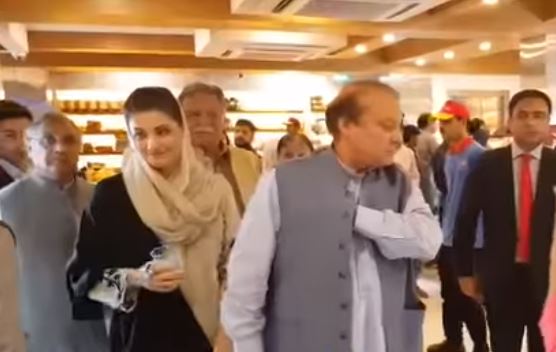 Recently, Nawaz Sharif made an appearance at a bakery in Islamabad in an absolute protocol of vehicles, followers and the general public. The crowd were overwhelmed by their infamous leader as some spectators showed immense reactions of surprise and happiness. The magnitude of Nawaz Sharif’s profile and influence would have made it harder for the bakery staff to manage things. A worker at the very same bakery in Islamabad shared the actual story of his arrival.

Here’s the bakery staff sharing the shocking details of what happened when Nawaz Sharif made a visit:

Boy, oh boy… the real story is revealed by this worker. Well, what could you have expected? Politicians are always on the look for maximum protocol but as told by this worker, no one deserves such a treatment.

Many Pakistanis including PML-(N) supporters were raving about Nawaz Sharif’s visit with respect to how humble, down to earth and kind human being he is. However, the actual picture, as told by the worker, happened to be quite different.

He wasn’t alone. He brought Maryam Nawaz along with prominent PML-(N) members as well as members of parliament. What were they trying to prove even? Can you foreshadow something before the upcoming elections in 2018?