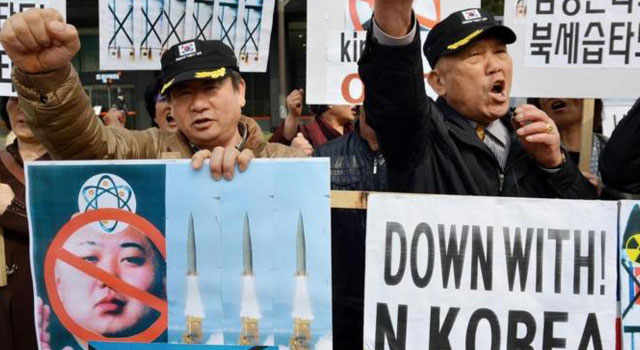 The US has urged North Korea not to threaten regional peace by conducting new nuclear tests, saying it is monitoring the Korean peninsula because of Pyongyang’s history of taking “provocative actions”.

“North Korea has a history of taking provocative actions, and we are always mindful of the possibility that such an action could be taken. Depending on what it is and what they do, if they do anything, it would most likely be in violation of numerous commitments that the DPRK is bound by. But of course, that is something that they have, unfortunately, done many times.”

He made the remarks aboard Air Force One, as President Barack Obama embarked on a four-nation tour of Asia. The US leader is in the Japanese capital of Tokyo on Wednesday and in the South Korean capital of Seoul on Friday. He will also visit Malaysia and the Philippines.

Separately, US State Department spokesperson Jen Psaki said in a news briefing that Washington urged North Korea to refrain from actions that threatened regional peace and security and to comply with its “international obligations and commitments”.

The South Korean news agency, Yonhap, quoted the country’s defence ministry as saying it had detected “a lot of activity” at the Punggye-ri site.

“North Korea reached a level where it can conduct a surprise nuclear test in a short period of time,” ministry spokesman Kim Min-seok told reporters on Tuesday.