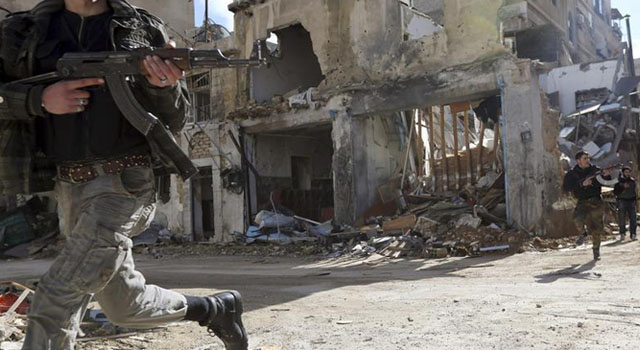 Proposed measures include a dedicated hotline and stripping people of French nationality as deterrence and punishment.

France has unveiled steps to stop its citizens from joining the Syrian civil war and prevent young French Muslims from posing a threat to their home country.

France, which has been a staunch opponent of Syrian President Bashar al-Assad, estimates the number of its nationals directly involved in the Syrian conflict is about 500, Foreign Minister Laurent Fabius said in a radio interview.

France will take all measures to dissuade, prevent and punish those who are tempted to fight where they have no reason to be

But with the Syrian conflict entering its fourth year, the government has increasingly come under fire for failing to stop its nationals – some of whom are as young as 15 – from heading to Syria.

“France will take all measures to dissuade, prevent and punish those who are tempted to fight where they have no reason to be,” Hollande told reporters on Tuesday.

At the weekend four French journalists, who returned from Syria after being held by an al Qaeda-linked group, said some of their captors had been Francophone.

Speaking on France 2 television before officially unveiling the measures to the cabinet on Wednesday, Interior Minister Bernard Cazeneuve said the steps could go as far as stripping people of French nationality – along the lines of new British legislation introduced last year.

Parents will be encouraged to signal suspicious behaviour in their children through a dedicated hotline, after which officials will immediately be sent to assess the situation.

“French Islam is not radical…what we need to do is prevent this behaviour. Minors and teenagers are often fragile and can fall into the hands of preachers of hate and recruiters,” Cazeneuve said.

In total about 20 measures will be presented, with those not requiring new legislation being implemented in the coming days.

Cazeneuve also said minors would be prevented from leaving France without parental consent and that the names of those identified as wanting to leave for jihad would be indicated to the European Union’s 27 other members.

French nationals who returned from Syria could now also automatically face criminal charges for being part of a
terrorist organisation, he said.

“This is a comprehensive plan to fight a phenomenon that is in sharp progression,” a government source said.

“The idea is to deal with the problem from when someone is in their room watching jihadi videos to the moment when they are taking the bus..to the Turkish-Syrian border.”

Cazeneuve said the new measures would enhance surveillance of websites that recruit fighters and aim to block assets of those behind them. He said the government would also push European partners to close down extremist sites.