Kashif Abbasi Gets Banned By PEMRA Over ‘Boot’ Controversy

The Pakistan Electronic Media Regulatory Authority (PEMRA) faces a lot of backlashes every time it issues a notice. The regulatory body definitely has a very challenging job. They have to make sure that concerned people are properly following the code of conduct.

However, when it comes to Current Affairs talk shows and anchors, their job will become more hectic. For the sake of rating and publicity, several of them cross the line that results in controversy. Recently, a new wave of debate started when PEMRA banned Senior Journalist Kashif Abbassi for 60 days when he allowed a Federal Minister to commit an unethical act on his live show. 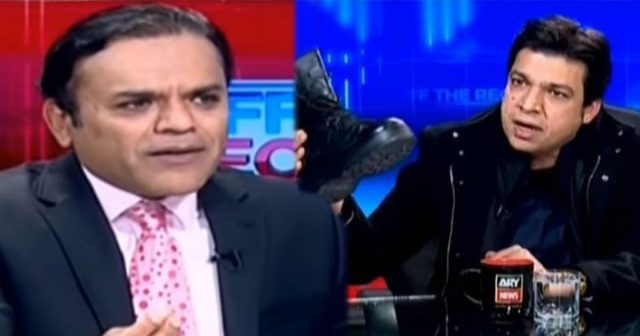 On 14h January, Federal Minister Faisal Vawda appeared on Kashif Abbasi’s show “Off The Record” along with Qamar Zaman Kaira of PPP and Muhammad Javed Abbassi of PML-N. In the middle of the heated argument, Mr. Vadwa brought out a boot from the bag and put it on the table. He said: “The PML-N gave respect to the boot by lying down. From now on, I’ll bring it to every program.”

However, the Federal Minister crossed the line in criticizing the opposition members for supporting the Army Act Amendment Bill. After the incident, both the members of the opposition party walked out of the show.

Following Mr. Vadwa’s move, PEMRA said that the minister’s remarks were: “extremely frivolous and derogatory but also an attempt to debase a state institution.” However, no action was taken against the minister.

Meanwhile, after Vadwa’s act, Kashif Abbasi responded to him with a smile, said: “When you handed me a letter before the show, I thought you were going to bring a gun. But this [boot] seems much more dangerous.”

Certainly, because of his light reaction, PEMRA banned the show. They said in a statement as the host was unable to stop the unethical act of the minister, we imposed a ban on him. Stating: “rather took the entire incident casually and kept smiling/cherishing such occurrence”.

However, after the notification was issued by PEMRA, the journalist community came on the front foot in support of their fellow. They loaded Twitter with their unpleasant responses to the notification.

PEMRA should define it,

Who has tried to invent a #BootDoctrine through #PEMRA without identifying which institution is symbolised by #boots ?#KashifAbbasi & #ARYNEWS should legally ask for a notification of boot representing a state institution from PEMRA!
The sale of boots on @darazpk is good👍 pic.twitter.com/g47Nnuvv4p

While some inquired about the minsters ban,

#PEMRA notice to #ARYNews putting @Kashifabbasiary off air for 2 months! Ridiculous. Will the federal minister be banned as well? What abt all the shows where politicians have been humiliated? It's a shame how "selectively" muscles are flexed. Excessive & uncalled for pic.twitter.com/kKtvPM5vqg

Pemra is becoming a tool in the hands of powerful people this ban is violation of Pemra law no action taken against the Govt Minister who came in the TV show with a boot https://t.co/pkmh7LuOUD

At least give him a chance to explain,

Attack on Freedom Of Speech,

What Faisal Vawda did on tv was ridiculous, and the minister is being rightly condemned by many. But what @pemra has done by banning @Kashifabbasiary and his prog for two months is worse. It’s a direct attack on the freedom of press. https://t.co/7BwxkRf8CR

As of now, the host is banned for 60 days. During the period he is not permitted to appear on any TV channel as a host or a guest. Moreover, if he was breaking the code of the punishment, PEMRA has the right to cancel the TV channel’s license.