Undoubtedly, parents are truly a blessing for their children when it comes to raising their children right. No matter what the circumstances be, parents are always seen as a support system and this recent story confirms the stance. Despite leading a struggling life, this daughter of a Pakistani fruit vendor defied all odds and became a gold medalist fro her parents.

It is extremely heart-warming to see such exemplary couples who don’t believe in compromising with their children’s future. Similarly, last year, a Pakistani rickshaw driver worked hard to educate his 6 daughters while one of them was in IBA. Recently, another such story went viral, after a daughter of a Pakistani fruit vendor made her parents proud by winning a gold medal in university.

Here’s the complete report on the event!

Covered by the news publishing outlet Samaa, the splendid story came out from Pakistan’s Faisalabad city. According to media reports, Abdul Ghaffar, a fruit vendor in Faisalabad became an inspiration for many after his daughter graduated. Reportedly, the daughter named Noorul Sabah recently completed her degree with a gold medal hung in her neck.

Noorul Sabah was studying MSc Economics in the University of Education in Lahore while her father sold fruits. Eventually, Abdul Ghaffar’s consistent efforts and sincere intentions made his daughter victorious with an emotional share. Talking to media on his child’s achievement, Abdul Ghaffar with a shaky voice stated, ”Ye [Noorul Sabah] parhti gayi. Hum is ka saath detay gaye”.

Dedicating her big achievement to her parents, Noorul Sabah said that this gold medal only belongs to her parents. Speaking on the occasion, Abdul Ghafar’s daughter stated, ”Ye gold medal main apnay waldein ke naam karti hun. ye unhi ka hai”. Certainly, the teary eyes and trembling voice of the father made the pride evident on his innocent face.

Others who made their parents proud!

Well, apart from Abdul Ghaffar and his daughter, two other individuals overcame the harsh times and won gold. As per media reports, Arsalan Zafar, the son of a toy seller who studied BSc Chemistry at the institute also won a gold medal. Moreover, another bright student, Rabia Nazeer, whose father is a building constructor got a gold medal in special education. 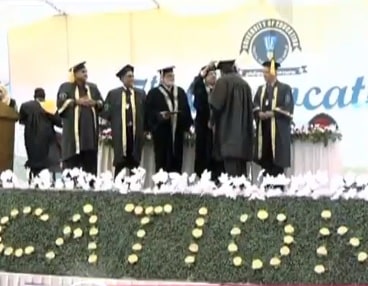 Not just a few, but Pakistan is filled with such amazing parents and their inspirational stories of how they made it happen. Back in December 2019, a teacher from Sialkot revealed her aim of educating the country’s future scientists. Well, congratulations to the parents and their children who showed the world that anything is possible if the intentions are positive.

Kashif Abbasi Gets Banned By PEMRA Over ‘Boot’ Controversy
Malik, Hafeez Are Back As PCB Announces Squad For Bangladesh T20I
To Top