Shahid Afridi kinda and sorta stole the Defence Day show which took place on the 6th September, 2018. While sitting behind Prime Minister Imran Khan and COAS, Shahid Afridi was caught on live television, sniffing something.

Now, given the Pathan ethnicity of Afridi, everyone assumed he is sniffing or chewing naswar.

Watch the Video Yourself 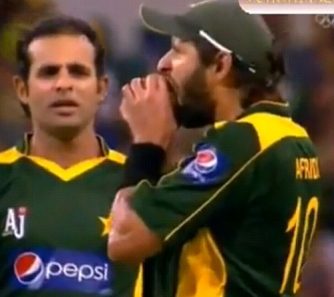 Now In THIS Closeup, You Can Definitely See Afridi Lifting his Lip and Putting Something

So anyway, with something like this going all over the social media, it was bound to reach to the man in the video himself.

So yesterday, while Afridi was seen out, media cluttered around him and asked him about the video that was circulating on social media. The media asked Afridi to comment on the video and Afridi, in a relaxed attitude, said that it is a combination of laung and sauf.

Afridi took out a packet from his coat’s pocket and made one reporter sniff it as well.

Here’s The Video of What Happened

Right after giving this explanation (sort of), Afridi got back in his car and left the scene.

Well, if this is the truth, it was still an amazingly hilarious moment to see THAT on national television and it gave everyone caught a life.