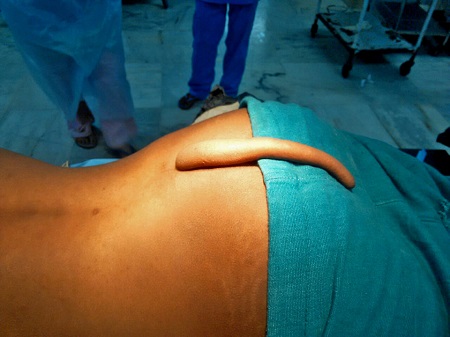 A teenage boy in India had his ‘tail’ removed after it became annoying and painful. The family and the boy used to hide the fact that he has one until it became a problem while sitting and lying down as a bone grew inside it.

The 8 inch long tail of the teen is the longest ever recorded. The mother said that the family used to take the child for routine checkups and no one ever noticed anything abnormal. The tail came into notice when it grew outside of the body.

The surgeons who operated on the 18 year old boy say that his tail is the “longest recorded so far”.

“Generally, the defect is detected very early as it is present from birth and since it grows with age it cannot remain undetected.” said Dr Pramod operating on the boy. He further stated that, “The defect can be surgically corrected within few months of birth.” A defect his parents chose to hide.

“When the size of the tail grew and a bone developed inside it, the tail began to press on the boy’s back. It was cosmetically and psychologically disturbing for him. Hence the parents approached us.” the Doctor concluded.