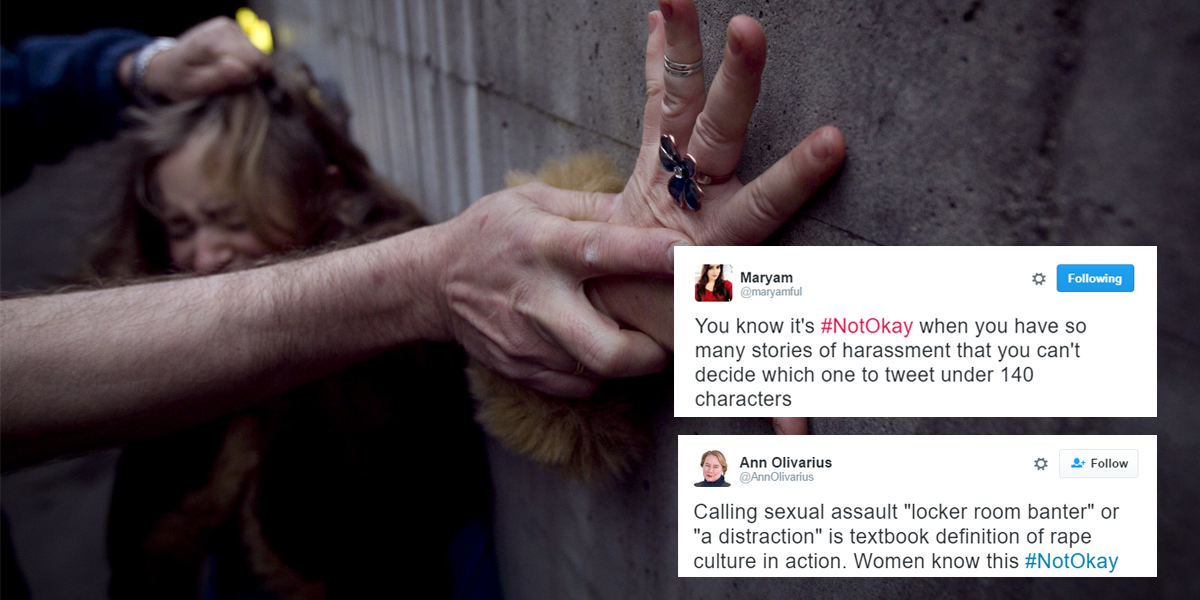 Sexual Harassment is no joke – may it be men or women, sexual harassment leaves a person with multiple emotions jumbled up in their heads.

“I should’ve been strong.”

“What did I allow this to happen to me?”

“Will someone accept me after what happened to me?”

A sexual harassment trend on Twitter started trending today and within minutes, it reached the top spot. Why? Because people from all around the world used this medium to express what they had kept in themselves for years.

US presidential candidate Donald Trump’s locked room conversation tape with his friends back in 2005 was leaked on the internet. It is on tape how Trump encouraged the act of sexual harassment as he had done that himself as well.

"Character is what you do when nobody’s watching. Trump was sober, mid-day" – John Avlon pic.twitter.com/qslSYroYTE #notokay #trumptapes

Following tweets will leave you heartbroken:

It All Started From Here

After the locker room tape of Trump was released on the internet, Kelly Oxford motivated women to share their sexual harassment stories.

women have tweeted me sexual assault stories for 14 hours straight. Minimum 50 per minute. harrowing. do not ignore. #notokay

It Prevails So Much Around the World

When I saw the hashtag #NotOkay, my initial reaction was; "Which of my experiences should I write about?"

You see, THAT's the problem.

It Is Not A Joke – Please Stop Taking It Lightly

The tweets under #notokay hurt my heart. As a father of two boys, I'm calling on all the dads to raise a new generation of upstanding men!

It Takes Courage for Women To Speak About It

Mad respect to all those women speaking up against traumatising harassments they face everyday,takes a lot of courage to speak up #notokay

Our Religion Says The Same

It Is Not Men Vs. Women When It Comes to the Dignity Of Someone

If I start telling u stories about the harassment women around me faced n r still facing you guys will be ashamed of your gender. #NotOkay

Imagine if every woman could share her story right under this hashtag, it would depress you all for weeks. #NOTokay

It Is Not A Choice

It's sad to see that whenever a girl talks about being abused, majority blames her for what happens. #Notokay

There Is A Difference Between a Man and a Devil

The difference between being a biologically mature male & a fully grown man starts from the neck up. #Respect women! It's #NotOkay not too!

Fear Of God? It Left Us Ages Ago

I was groped by a man at the age of 12 while performing Umrah.If he wasnt fearful infront of God, I wonder what he'd be like outside #NotOk

From one woman to another, it takes courage to talk about these aspects on a social platform. Mad respect and power to women all around the world.