My very first visit to Dubai was in 2007 on a short trip to get a much-needed break from work. I remember peering down from the airplane window and seeing the vast stretch of the desert, the sandy brown desert, and some buildings clubbed together. I was totally mesmerized by the tall buildings as we drove down from the airport to our hotel.

Though I have been here many times after that but I still continue to be amazed by its innovative and ambitious architecture. It seems like, in the skyscraper-crazy Dubai, tall isn’t enough. A playpen for architects with some of the most eccentric building designs in the world. To be poetic, what the mind imagines, the Emiratis have built.

Possibly the most dynamic city in the world, Dubai scenery changes quickly and I must say quite dramatically. I don’t recognize the streets, buildings or even the neighborhood from my first visit, some nine years ago. Everything looks different and new (because it probably is). It is hard if not impossible to believe that Dubai was once home predominantly to the desert Bedouin, sea fishers, and pearl divers. This little fishing village has been transformed beyond recognition, beyond the wildest dreams. 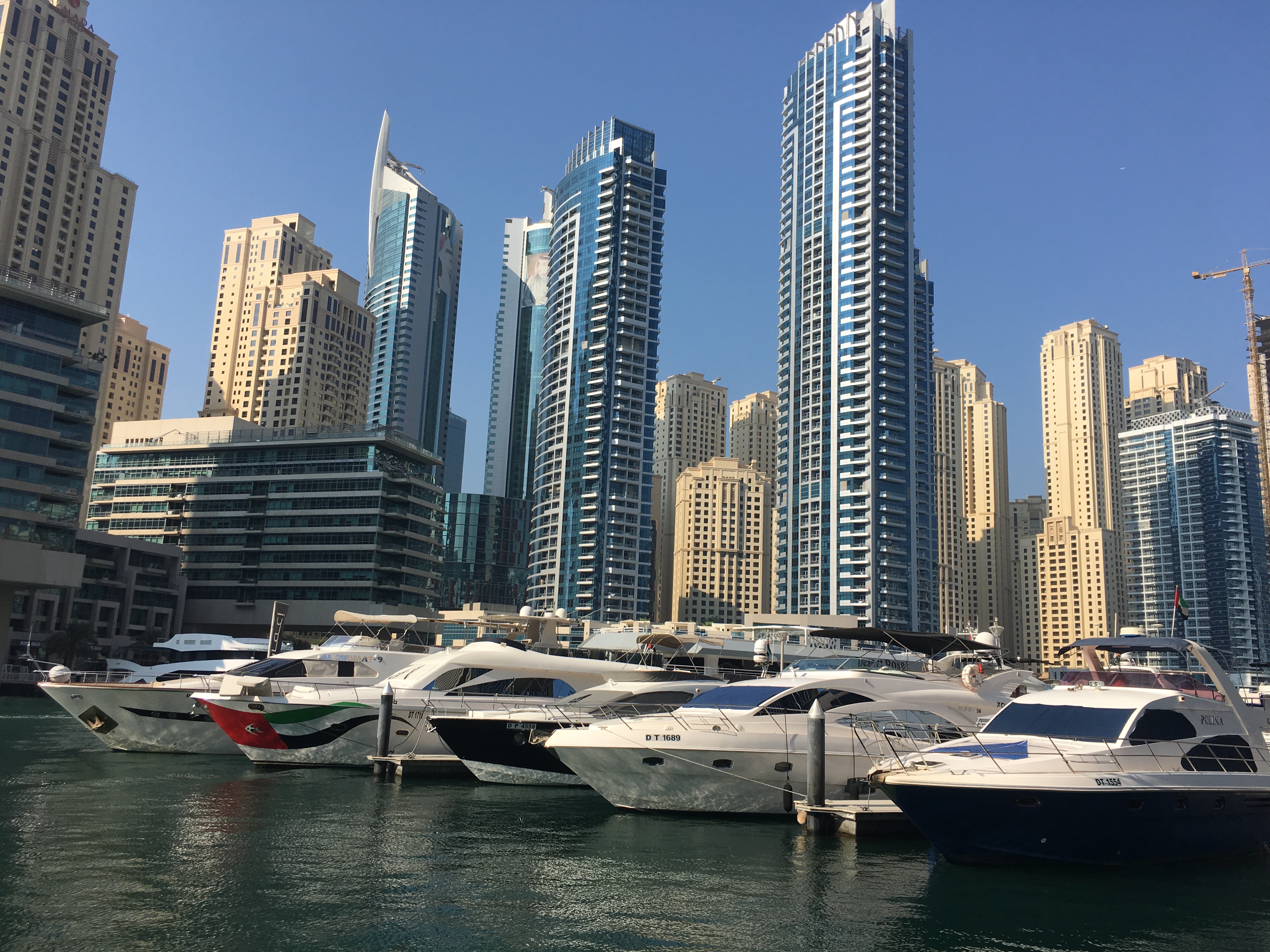 It is no wonder that Dubai uses a quarter of all the cranes existing on the globe. Audacious architecture, spectacular skylines, the world’s largest airport, the world’s only “seven-star” hotel, the world’s tallest tower, the world’s largest shopping mall, the manmade islands, the underwater hotels and buildings that spin, not forgetting to mention the snow dome that churns out artificial snow in the Middle East heat of 50C. How cool is that?

It is not just me but other writers also run out of adjectives to describe the phenomenon that is Dubai. Many are forced to come up with innovative expressions to drive home their point.

The CEO of a financial services company Bob Gogel puts it succinctly: “Dubai is an unpolished gem polishing itself very quickly. You could look at it as a CD compilation – the best of London, Sydney, Miami, and Las Vegas”. In the conservative Times, Tim Hames writes “Dubai is a place that plainly believes that size really is everything” and refers to parts as resembling “Disney in the desert, though with a coastline”. 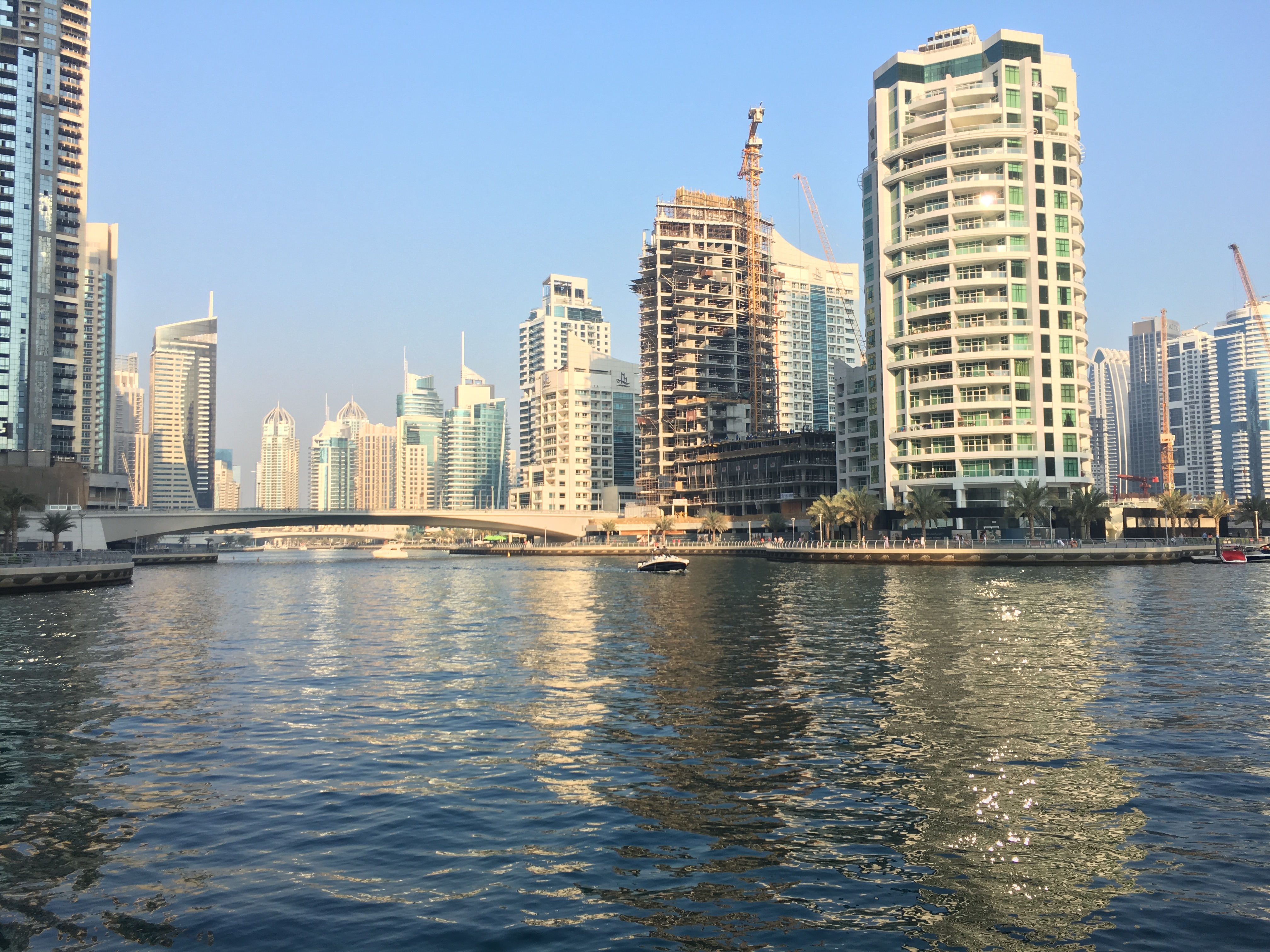 In reality, of course, Dubai is an Arab hybrid, a one-off mélange of the best the world has to offer blended with local traditionalism.

I’m sharing my day one in Dubai surrounded by its indescribable architecture. Even with the many of Dubai’s awe-striking buildings, Dubai Marina stands out as the home to some of the newest and rather quite fascinating buildings. Built along an artificial canal and bordering the stretch of Persian Gulf shoreline, the views here are stunning, to put it mildly. Built in the last few years this is a city within the city. With some of the best hotels here, there are hundreds of dining options along the canal. There are boats for private hire and their regular group trips departing hourly to various locations around Dubai. With cycles and go carts for rent this place gets very busy as the evening sets in. I decided to walk today and explore the area.

As I walked along the canal I was forced to marvel at the “beauty” of the surrounding tall buildings. Like giant trees planted along a river. All kinds of interesting and perplexing designs around the flowing emerald green water of the canal dotted with yachts. So much symmetry, so elegant. Reminded me of the river Thames in London and new modern buildings coming up around it. Though I’m not aware of the history of the inspiration behind the idea for Dubai Marina, but to my mind, it does hold some close resemblance.

I stop many times to let the scenery sink in. Man-made wonders! It is not just me but many a tourist who walks along here is forced to look up. I see a look of marvel on their faces. The joggers running past me also turn their heads often to take in the beauty.

The pink sky, the boat breaking the water and people walking by. So calm and peaceful as the sunsets on a beautiful day!