As deaths mount and cities continue to flood, experts are once again sounding the alarm bells over the impacts of climate change in Pakistan.

More than 110 have been killed in Punjab, Azad Kashmir, Gilgit-Baltistan and Khyber Pakhtunkhwa due to the heavy torrential rain since Thursday. A number of cities have received over 130mm of rain and the National Disaster Management Authority has said it expects “exceptionally high flooding” in the Chenab and Jhelum rivers over the next few days.

A high-intensity, late monsoon such as this is becoming a pattern now but according to experts the country is yet to learn from recent disasters.

“Earlier we would have well distributed rains during the monsoon season. Now thanks to climate change, the monsoon is becoming more erratic. This season the rainfall was largely below normal and now at the end of the monsoon we have a strong system with high intensity rainfall which is causing destruction,â€ explains Dr Qamar-uz-Zaman Chaudhry who has recently been appointed Special Envoy of the UN-World Meteorological Organisation on Disaster Risk Reduction and Climate Services for Asia.

Chaudhry is the former Director-General of the Pakistan Meteorological Department and also the lead author of Pakistanâ€™s National Climate Change Policy (NCCP).

â€œThe NCCP had called for an improvement in flood forecasting systems across the country,â€ he points out.

“It had also called for the increased capacity of storm drainage systems in urban areas in expectation of the increased intensity of rainfall events.”

Unfortunately, the comprehensive NCCP that was launched by the PPP government in February 2013 has now been shelved. Shortly after coming to power in the May 2013 general elections, the PML(N)-led government demoted the Ministry of Climate Change to a Division and slashed its budget. The national action plan to implement the NCCP in consultation with all the provinces and regions was never initiated in earnest.

According to Chaudhry, the NCCP was not being implemented simply because climate issues ranked very low on the countryâ€™s priority list. 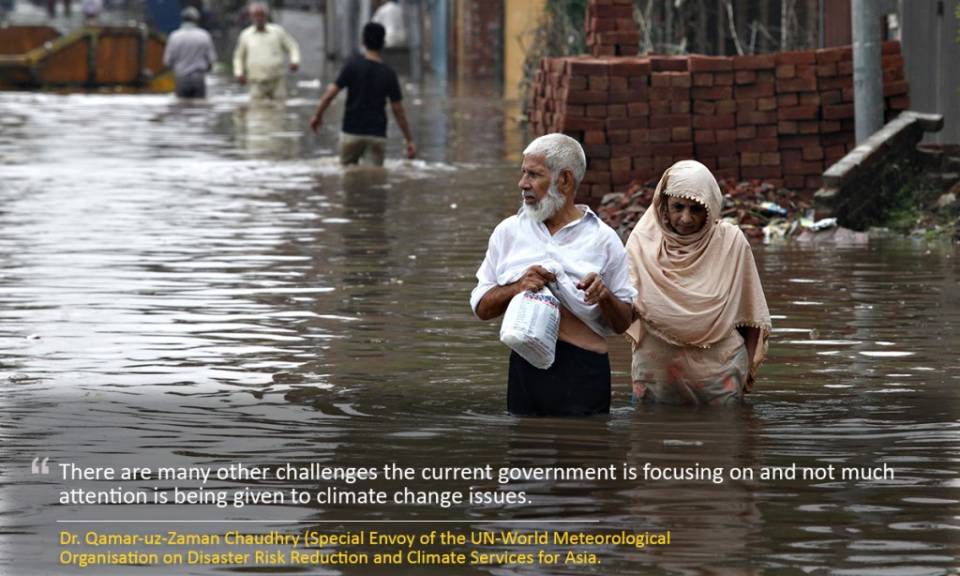 In Pakistan, climate change issues get the lowest priority, despite the countryâ€™s vulnerability to its devastating impacts.

The NCCP highlighted the countryâ€™s vulnerabilities to climate change which include erratic monsoon rains, increase in extreme weather events like floods and droughts, projected recession in glacial reserves (a major source of fresh water for Pakistan) and an increase in heat and water stress conditions among others.

For the past three years, the country has topped the list of the Global Climate Risk Index produced by Germanwatch, an NGO that works on global equity issues.

In 2010, Pakistan was listed as the number one country in the world affected by climate related disasters (due to the massive flooding that hit the country); in 2011 it was ranked as number three. Last yearâ€™s report listed Haiti, the Philippines and Pakistan as hardest hit by weather disasters in 2012. This yearâ€™s report will be launched at the UN Climate Change Conference to be held in Peru in December.

According to Chaudhry, the pattern of recent extreme weather in Pakistan (such as the super floods of 2010 and the more localised floods of 2011 and 2012) clearly indicate the increased frequency and intensity of such events, which is in line with international climate change projections. Scientists all over the world say the debate on climate change is now over and there is a clear consensus that greenhouse gas emissions are warming the planet. They expect this will lead in future to more evaporation of water, moister air and heavier rainfall.

‘Life getting worse for Pakistanis’
The UNâ€™s Intergovernmental Panel on Climate Change (IPCC) recently launched their Fifth Assessment Report, which has concluded that the scientific evidence for climate change is â€œunequivocalâ€ with human activity extremely likely to be the cause. The report finds that there is widespread evidence of climate change impacts â€œon all continents and across the oceans.â€

The Asian region as a whole experienced the most weather and climate-related disasters in the world between 2000 and 2008 and suffered the second highest proportion (almost 30 per cent) of total global economic losses. The IPCC finds that the risk of deaths due to flooding is highly concentrated in Asia and that an increase in extreme rainfall events related to monsoons will be very likely in the region. According to the panel, adaptation is the only effective option to manage the inevitable impacts of climate change.

Adaptation is fundamentally about risk management and South Asia has many adaptation options.

Pakistan urgently needs early warning systems at the district level and other Disaster Risk Reduction (DRR) activities, but as Chaudhry points out â€œnormally countries would use devastating floods like the ones that occurred in 2010 as an opportunity to improve early warning systems and other systems but our country has not been investing enough in this area.â€ 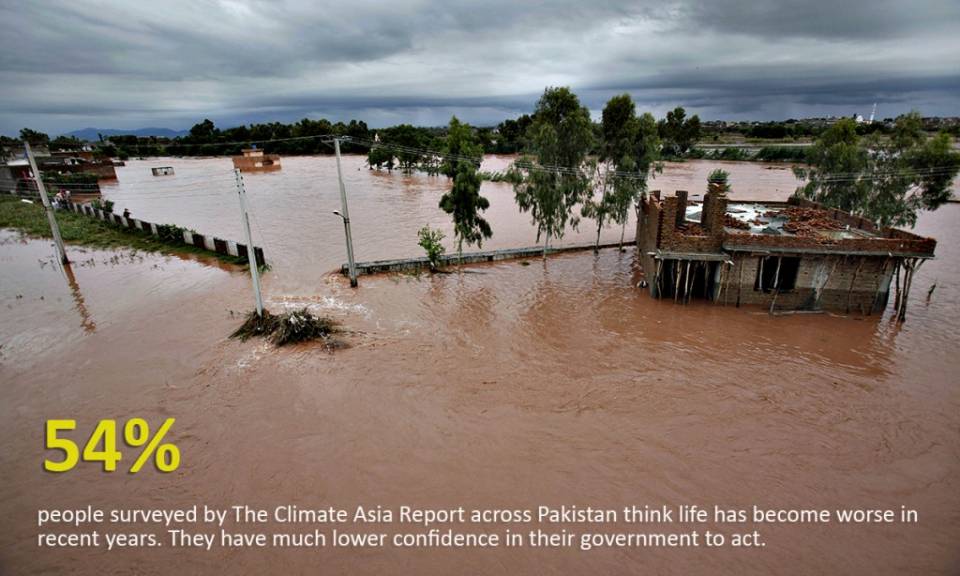 A recent BBC report on communicating climate change in Pakistan finds that people across the country are now experiencing unpredictable rainfall, increased temperatures and changes to the seasons. The Climate Asia Report found that 54 per cent of people that they surveyed across Pakistan think life has become worse in recent years. They have much lower confidence in their government to act.

Climate change is not going away; in fact it is going to get much worse and the government needs to adapt to its impacts on an urgent basis.

Pakistan must act now. Other countries in the region like Bangladesh are already doing it and we can learn from them.

After being hit by 21 major floods since 1950, one would have thought Pakistan would by now have an effective flood management and disaster relief plan in hand.

Woefully, that is not so.

Most water and flood management experts know what works and what does not, the engineering mistakes made in the past, the poor decisions taken and what to do with the extra water. But those working in the government are often heard whispering that their hands are tied because political decisions override the informed solutions offered by the engineers.

While rising population, weather aberrations due to climate change and degradation of ecosystem, especially deforestation, can squarely be blamed for the floods, the risks have been exacerbated by the management mess that prevails, experts say.

Naseer Memon, heading the Strengthening Participatory Organisation, emphasises there is time still to look into the root cause of the 2010 floods and to draw lessons from it. The super flood of 2010 inundated an area of about 38,600 km affecting all the provinces. It killed approximately 2,000 people and caused a damage totaling over $10 billion.

According to Memon, the Indus River’s regime has been “dangerously” tampered with and the response to it has been, at best, “ad-hoc and casual”. 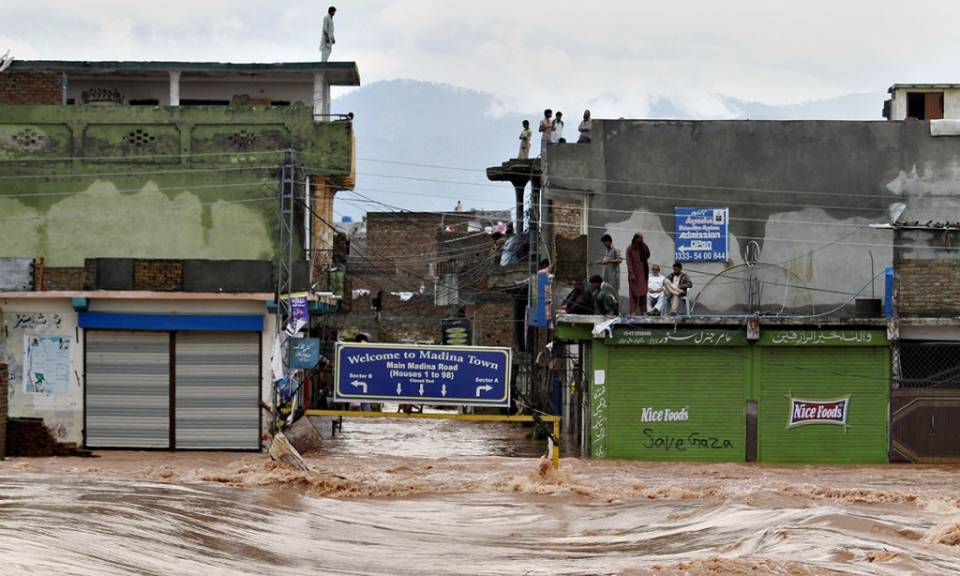 People stand on the rooftop of their flooded houses caused by heavy rains on the outskirts of Islamabad, Pakistan, Friday, Sept. 5, 2014. – Photo by AP

Memon, who authored â€˜Malevolent Floods of Pakistanâ€™, lamented at the “non-serious attitude” of the various governments in power which have never felt the need for a “multi-disciplinary” master plan to address the issue holistically.

This year, the met office has already issued warnings to the government of “exceptionally high flood” in Chenab River.

According to Muhammad Riaz, chief meteorologist at the Flood Forecasting Division, the Met Office has done its job of sending “advisories” and “alerts” to the various departments concerned.

Even Hameedullah Malik, the coordinator at Provincial Disaster Management Authority (Punjab), does not seem overly worried despite the huge loss of lives. In his opinion, important lessons were learnt during the 2010 floods and they have a detailed contingency plan complete with check lists that need to be followed by all relevant departments.

“Everything is laid out according to our standard operating procedures; stockpiling is done, drugs, water, food and equipment deployed and boats for evacuation have been sent to the areas where flooding is imminent,” he told Dawn.com.

That maybe so, but Memon did not seem to have much faith in the dysfunctional disaster management authorities, he said: “Unless these are made effective at the provincial and district level, unless these have trained staff and are financially and operationally autonomous, these will remain worthless,” Memon told Dawn.com adding: “The political will remains missing.”

According to Memon, the detailed report by the judicial commission formed after the 2010 floods had cited, among other things, digressions by the flood management authorities.

“The Sindh government passed The Sindh Irrigation (amendment) Act 2011, declaring encroachment on the waterways as criminal act, but failed to come up with an effective rehabilitation plan. The result is that human settlement and economic activities continue unabated.”

Time for a new approach

Pakistan must employ a fresh approach to tackle, what will perhaps be a regular occurrence due to changing climate patterns.

It is time to “rethink traditional flood management approach and look at contemporary ways of mitigating the risks and make productive use of the water,” said Akhtar Ali, water resource specialist at the Asian Development Bank.

“Floods contain large volumes of freshwater and Pakistan being a water-scarce country facing a huge energy crisis, should use this precious resource optimally,” he added. 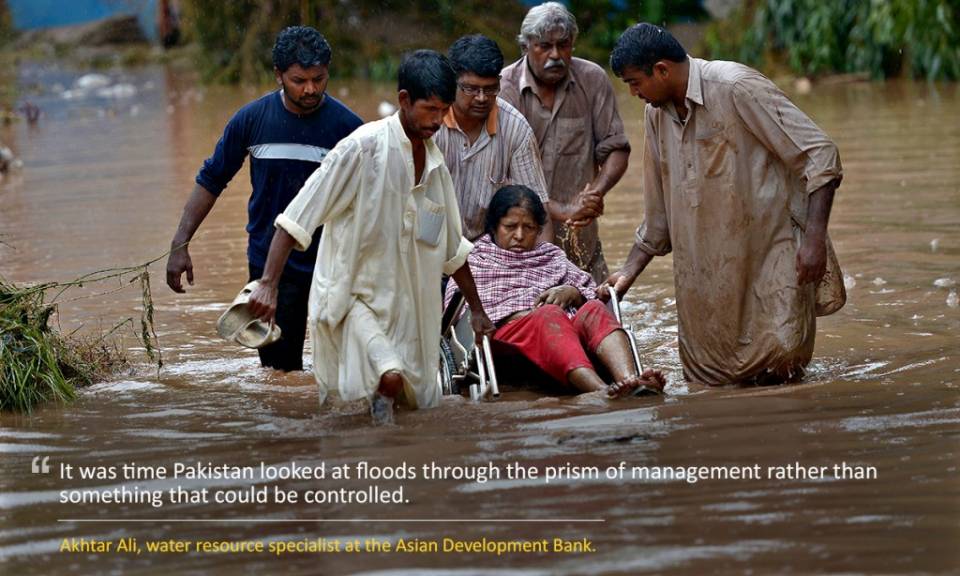 Ali, the author of the report Indus Basin Floods – Mechanisms, Impacts and Management 2013, said it was time Pakistan looked at floods through the prism of â€œmanagementâ€ rather than something that could be â€œcontrolledâ€. He suggested transforming age-old irrigation department into a water resource department for a holistic approach that looks at river basin management rather than only barrages and canals. He recommended a “robust” water and flood management policy which is supported by laws that are implemented by effective institutions.

Severe flooding has affected millions in Pakistan over the past four years.

The 2010 floods were the countryâ€™s worst in recorded history and killed more than 2,000 people and affected 18 million â€“ more than a tenth of the country’s population.

Triggered by heavy monsoon rains in late July, the floods swept through the Indus River basin, washing away everything in its path.

The flooding devastated parts of northwest Khyber-Pakhtunkhwa, southern Punjab and Sindh provinces province and an estimated 11 million people were made homeless by the disaster. The deluge destroyed hundreds of thousands of hectares of cultivatable land and crops in the traditional food-basket regions of Sindh and Punjab and at least 1.2 million livestock died, further affecting poor families, the UN Food and Agriculture Organisation said.

Pakistan suffered more than $10 billion in damages to infrastructure, irrigation systems, roads and houses and slow aid further compounded the misery of the flood affectees. 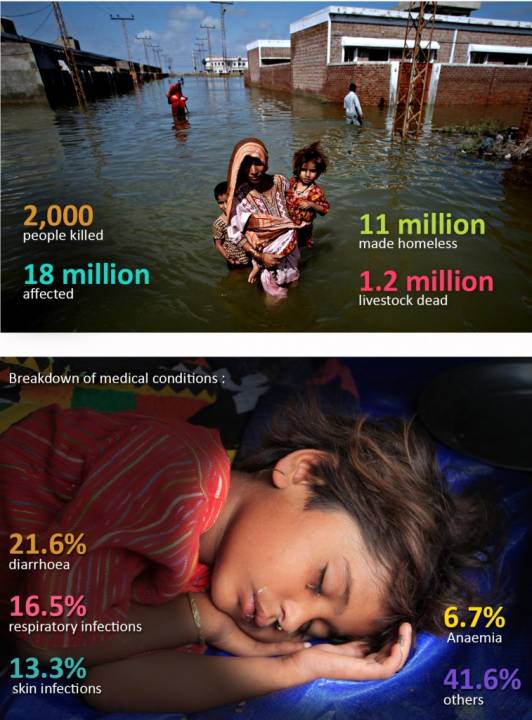 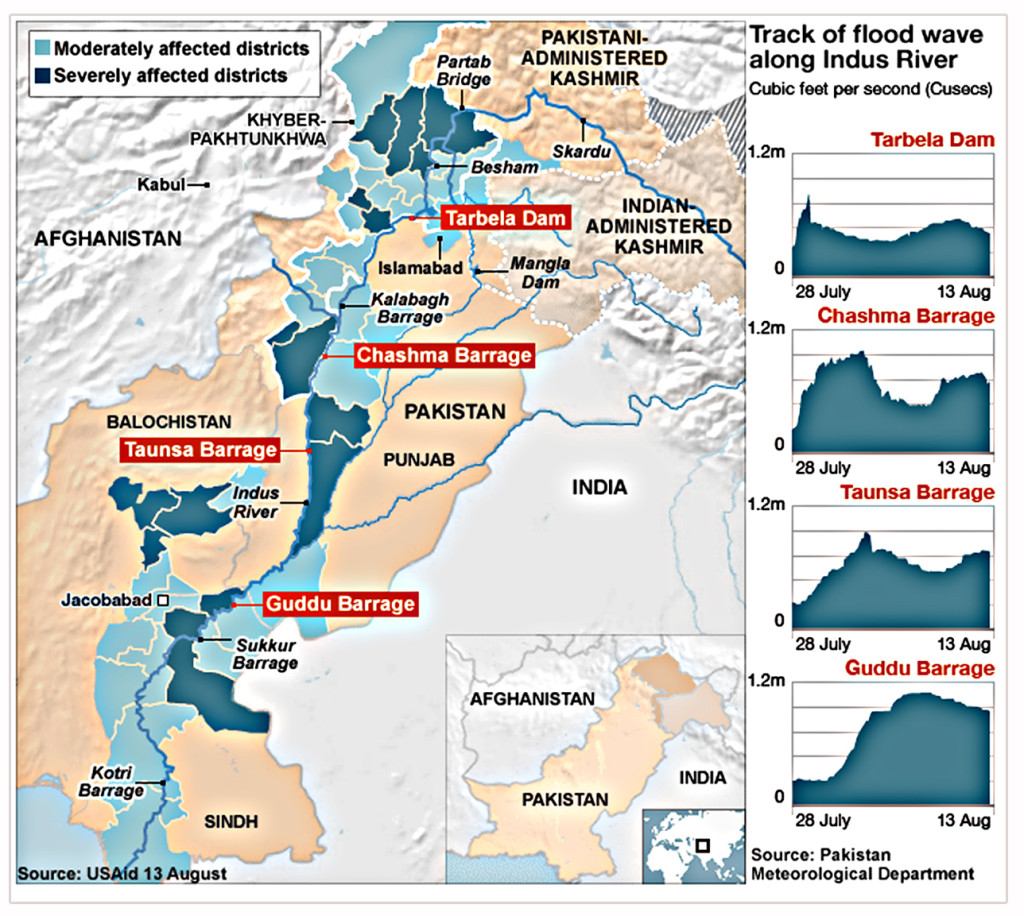 Sindh was especially vulnerable to new flooding.No lessons were learnt from the 2010 disaster and the 2011 monsoon season once again caught Pakistan woefully unprepared. Dikes and embankments along the Indus River were not prepared and the people affected in 2010 were still not rehabilitated properly.

Although the inundation of the scale of 2010 did not occur, the 2011 floods, according to the World Bank and Asian, Development Bank (ADB) Damage and Needs

Assessment (DNA) report, affected approximately, 9.6 million people have been affected in Sindh and Balochistan; 520 people were killed and more than 1,180 people were injured.

The floods heavily impacted the agriculture sector, with damages to crops, livestock, fisheries, poultry and on-farm water distribution infrastructure. The total loss estimated is US$ 1,840.3 million. 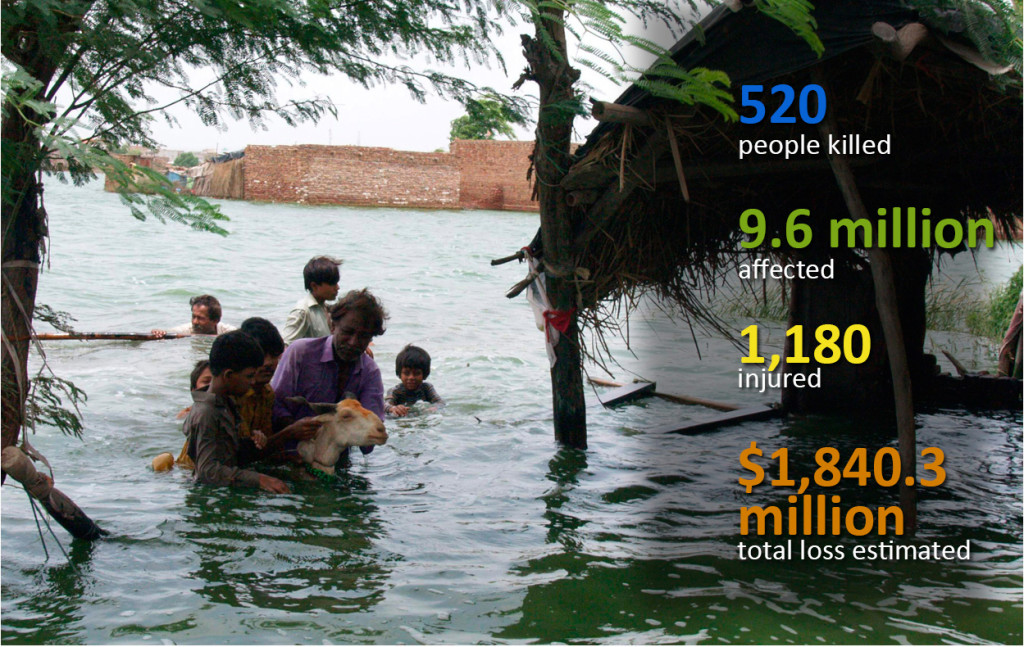 By the end of March 2013, water had receded in most areas, but standing water in parts of Sindh was still preventing some people from returning home. The 2012 disaster affected 14,270 villages, 1.1 million acres of crops and more than 465,000 houses were damaged. 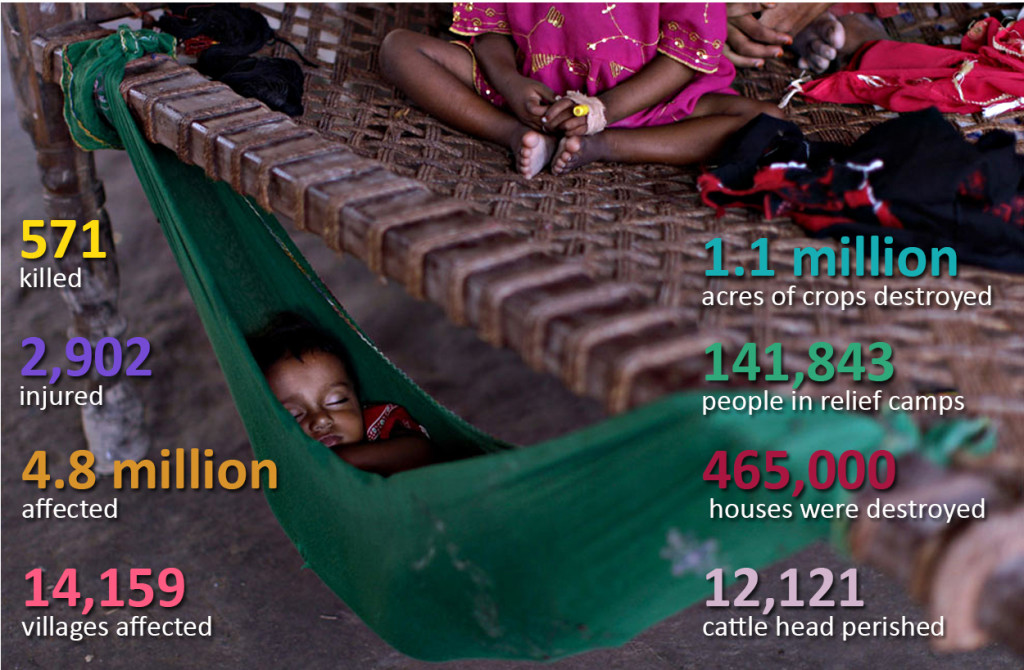 Heavy monsoon rains in August 2013 triggered flash floods and caused widespread losses and damage. According to Reliefweb, which works with the United Nations Office for the Coordination of Humanitarian Affairs, nearly 1.5 million people, almost 80,000 houses, and 1.5 million acres of crops were affected. The 2013 floods killed 234 people.

According to the National Disaster Management Authority a “relatively weaker monsoon season is projected for 2014 as compared to 2013.” It, however, warns that the recurrence of extreme events, “floods and droughts alike” cannot be ruled out. 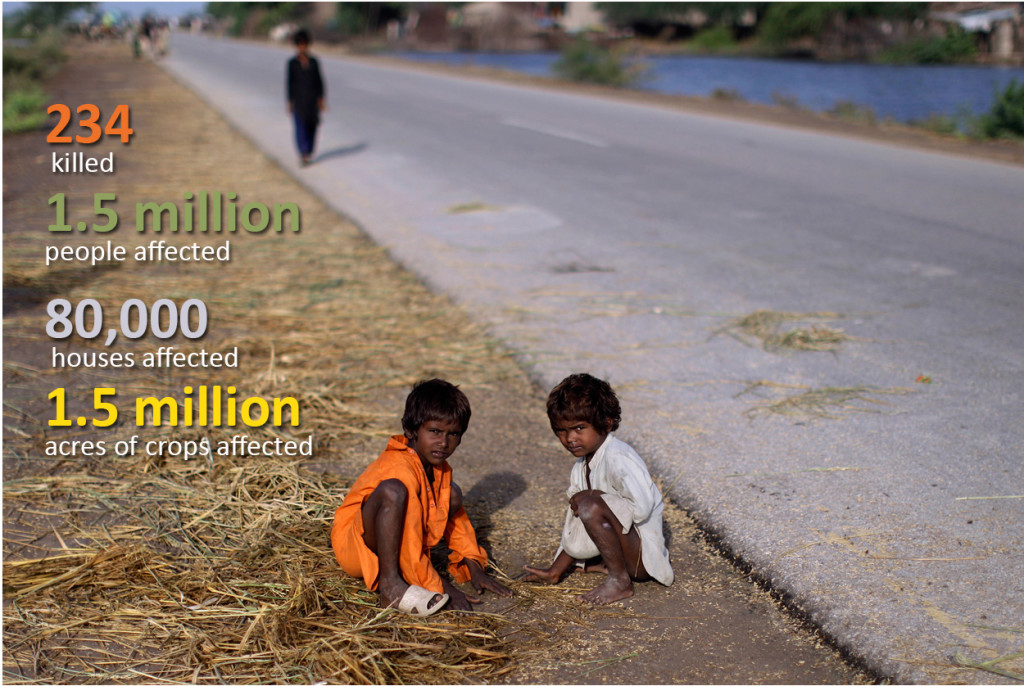 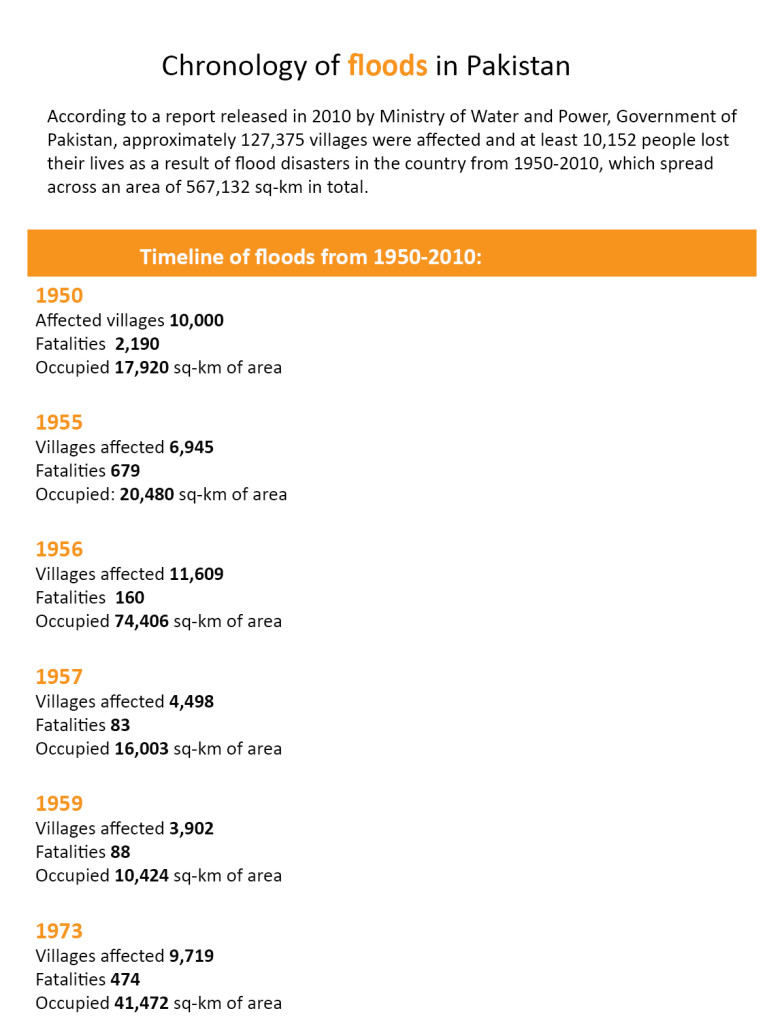 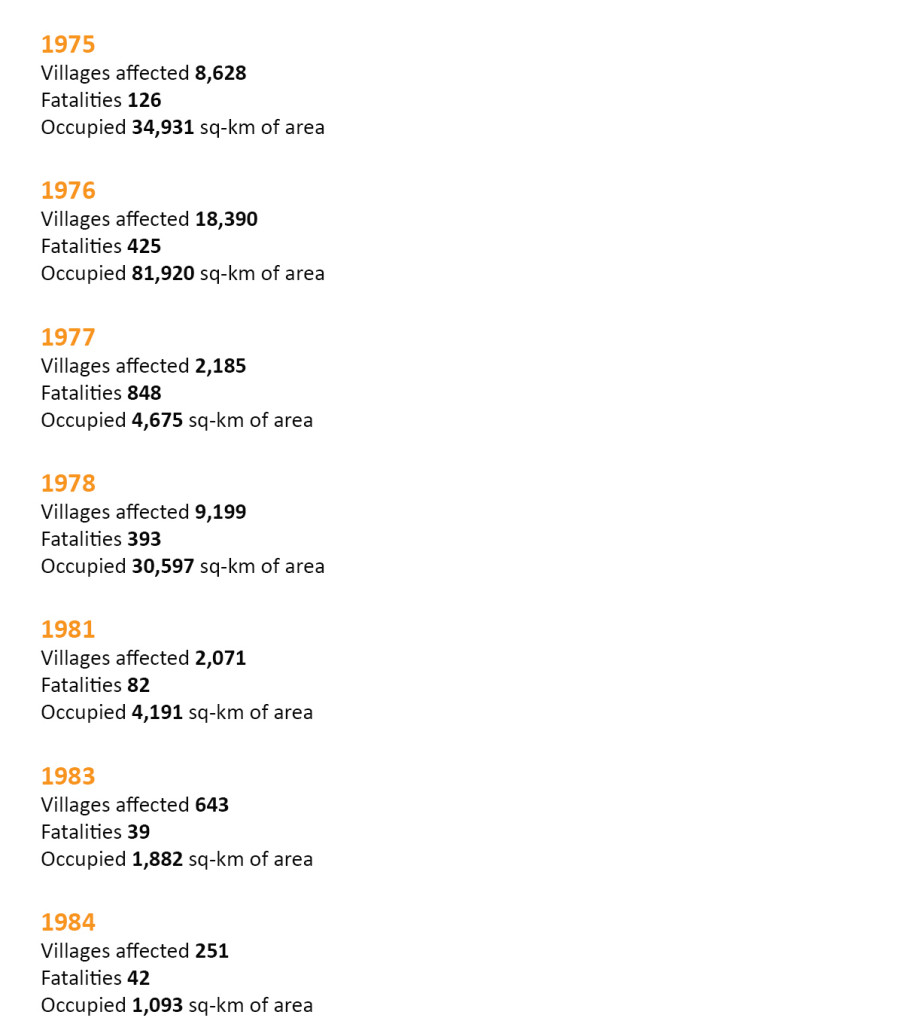 All Peace Makers Were Killed, Imran Khan Is Another: The Assassination of Imran Khan.
Deadly flood caught on camera in Multan!
To Top