This Citizen Misbehaving With An On-Duty Police Official Is Shameful!

The prevailing system won’t change if the efforts are not inserted from both sectors; the police and the common man. As time to time, videos of brawls between citizens and the safeguards of the country circulate on social media, it makes the disagreement evident. Recently, another such case added up after clip of a citizen maltreating an on-duty police officer went viral on the internet.

Another video of a citizen misbehaving with an on-duty traffic police officer went viral on the internet!

It is unfortunate to see the black sheep hidden within the ‘civilized’ system portraying the wrong image in front of the world. Last month, Karachi woman’s treatment with a traffic police officer in the metropolis, Karachi sparked a debate on elite culture online. However, one similar incident has broken social media after a citizen misbehaving with an in-uniform police official was caught in the act.

Certainly, it’s a universal traffic law that a ‘NO PARKING’ means the spot isn’t available for parking. Well, it seems the opposite in Pakistan as breaking a law here brings out an egoistic character of the common man, mostly. Similarly, the viral video is yet again making it true as the citizen, showing no respect is humiliating a traffic control officer in open.

As per the video, posted by Lahore News HD on YouTube, the citizen was parked in a ‘No Parking’ zone. Fulfilling his duty, the traffic police officer tried to take the wrongly parked car in a lifter towards the station. Eventually, seeing his car on a lifter, the citizen started threatening and disrespecting the on-duty official for lifting up his vehicle. 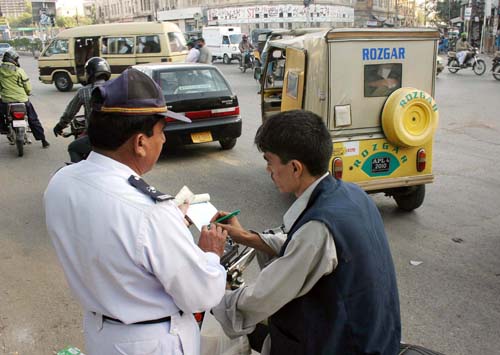 Repeatedly quoting “Mera baap bhai sab DSP hain, tu hai kaun?”, the citizen started shouting, literally. But the consistent nature of the police officer was surprising as normally stories of police misusing authorities are reported. Certainly, to fight for the good is right but misusing legal power doesn’t fall into the positive category.

Soon after the video went up on the internet, it has created divided opinions among the masses. Where the majority of the nationals favored the police officer for his patience and calmness, some showed disappointment over the prevailing ‘jungle’ law. Well, the video is indeed another shameful activity reflecting directly upon the VIP culture in Pakistan.

What do you think of the video? Let us know in the comments section below!