Coronavirus the contagion is inflicting catastrophe on the people across the globe. Doctors, WHO and health governments across the globe asking the people to practice good hygiene and observe social distancing. However, Prophet Muhammad (PBUH) has said this 1400 years ago. A billboard in Chicago, USA is depicting what the Prophet Muhammad (PBUH) said about precautionary measures.

Narrated `Aisha: “(the wife of the Prophet) that she asked Allah’s Apostle about the plague and Allah’s Apostle informed her saying, Plague was a punishment which Allah used to send on whom He wished, but Allah made it a blessing for the believers. None (among the believers) remains patient in a land in which plague has broken out and considers that nothing will befall him except what Allah has ordained for him, but that Allah will grant him a reward similar to that of a martyr.” SAHIH BUKHARI HADITH NO. 5734.

Furthermore, the Holy Prophet also described the cure of diseases, including COVID-19.

“Whenever the Messenger of Allah sneezed, he would cover his mouth with his hand or a piece of cloth,” Hadith.

Besides, the Prophet restrained going to a region where the contagious disease has broken out.  Awf said: “I heard the Messenger of Allah? (PBUH) say: If you hear that (the plague) is in a land, do not go there, and if it breaks out in a land where you are, do not leave, fleeing from it.”

This significant are the teachings of Prophet Muhammad (PBUH) that even the west is acknowledging them.

People on social media shared the post and reacted to it. 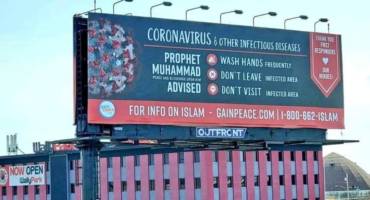 A Billboard on Chicago highway.
Please follow the message and stay safe.#StayHomeStaySafe#coronavirusinpakistan#coronavirusinindia#BringBackKashmiriStudents pic.twitter.com/tCOsQqHIZo

Attention:
To Dearest People Around The World
Listen
And
Listen #coronavirusinpakistan

To Dearest People Around The World

Attention:
To Dearest People Around The World
Listen
And
Listen #coronavirusinpakistan pic.twitter.com/kA3EY8mO5R