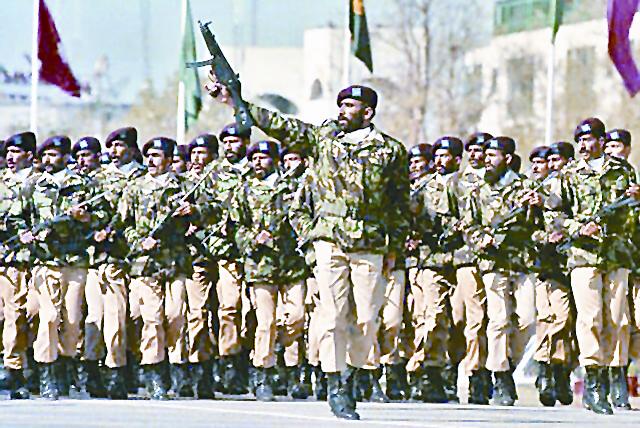 Pakistan has lost 70,000 of its people to terrorism. The figure of policemen and jawans killed stands somewhere between ten and twenty thousands. Earlier this week, Taliban launched the deadliest of all attacks of Pakistan’s history which (to last counts) has killed 162 including 140+ children in APS&C Peshawar. There is no national consensus still and Pakistan Army and its cronies continue to confuse masses with their usual conspiracy theories and blaming neighboring India and Afghanistan while running away from any responsibility by trying to prove terrorists were not Muslim and came from some unknown place. The fact remains that the terrorism in Pakistan is an outcome of policy of strategic depth of Pakistan Army which is enabled by the Jihadi narrative popularised in Pakistan by Deobandi madressah network, on behest and funding of Pakistan Army. The chicken have now come home to roost but Pakistan Army continues its policy of good and bad Taliban and is not willing to reverse its narrative and take on extremism. What is more tragic is the unflinching support that Pakistan Army enjoys, specially in urban centers by young educated lot who find it unpatriotic and traitorous to question Pakistan Army. So, here are my ten questions to Pakistan Army fan boys and girls….

2. Why Army gave a helicopter ride to Malik Ishaq of Lashkar-e-Jhangvi?

In the year 2009, self proclaimed Shia killer and head of ruthless terrorist outfit Lashkar-e-Jhangvi was flown on a military helicopter by Pakistan Army from Lahore’s Kot Lakhpat Jail to GHQ. Newsreports suggests he was flown in to broker a deal between the LeJ militants and Pakistan Army as LeJ militants had a dozen or so Army personnel held hostage in the GHQ in Rawalpindi. There were widespread Shia killings in the time that followed and analysts believe LeJ was given free hand to kill Shias in return for freeing Army personnel.

3. How Osama managed to live a KM away from Army cantonment for years?

Osama Bin Laden, the world’s most deadliest terrorist of Al-Qaeda lived in a compound built on 3500 square meter plot of land with 7 feet high walls. Ironically, this compound is located less than a mile away from Pakistan Army’s cantonment in Abbotabad which is one of the most strategic military bases in the region. For over a decade, Pakistan Army received coalition funds in the name of fighting terror and was well equipped and lavished with financial help but still could not find Osama living at stone’s throw away from them? Either the armed forces were hiding Osama, or the premier Intelligence Agency ISI is completely inefficient and inept.

Haqqani Network is a terrorist group allied with the Afghan Taliban and are loyal to Pakistan Army. They have launched several attacks on US-led NATO forces as well as on Afghan government officials and institutions and operate from Pakistani border. The US, with assistance from Pakistan Army has launched several drone attacks on Haqqani network but reports suggest they were able to escape every time before the attack making the US believe that Pakistan Army was playing a double game. The US, later on, launched independent drone attacks without information to Pakistan Army and they were found successful. This further proves that Pakistan Army is not ready to give up on strategic depth and continues to support terrorists across the border.

5. How ISIS/Taliban head at stone’s throw away from ISIS HQ is safe and untouched?

Maulana Abdul Aziz, current head of the notorius Lal Masjid and Jamia Hafsa has declared allegiance to ISIS and has on live TV said that his madressah students support ISIS and Taliban and has welcomed ISIS in Pakistan. From his madressah, the students run the world’s most dangerous online forum named Jamia Hafsa Urdu forum where videos of madressah students (working with Taliban and other outfits) butchering people are shared, as well as Jihadi propaganda is circulated. The cleric is regularly given airtime on live TV and has been untouched so far. Ironically, his madressah is at stone’s throw away from the premier intelligence agency ISI’s headquarter in the capital city. What stops ISI and Pakistan Army from taking action in the capital?

6. Who gives free hand to terrorists in cantonment called Quetta?

Quetta city in Baluchistan province is perhaps Pakistan’s biggest cantonment – the city is practically run by and under the control of Pakistan Army and FC for decades. Nothing moves in the city without the Armed forces knowing it. It is, in these circumstances, surprising to believe that terrorist outfits like Lashkar-e-Jhangvi can operate with impunity and mass murder Hazara Shias as and when they like and still remain untouched, while the Baloch rebels can not even run a Baloch newspaper. ASWJ, the terrorist sister outfit of LeJ was helped by Pakistan Army to establish a stronghold in Baluchistan and now Ramzan Mengal is one of the most feared terrorists in the region. Maulana Fazlur Rehman Deobandi’s jalsa was bombed by Mengal for the reason that he refused to invite him to the jalsa on instructions of security forces. Army fan boys can let us know how these terrorists operate with impunity in biggest cantonment of Pakistan?

7. Do you get the value for 700 billion expenditure of Armed forces?

Pakistan Armed forces received 700 billion rupees in the last budget – that’s almost 10 times Health and education combined. Pakistan Army also received 1800 billion rupees from 2002 to 2010 from coalition fund. The security institutions have also received further funding from international bodies/funders as well as from Pakistani Government in the name of fighting terror. Can the fans of Pakistan Army economically  justify this massive expenditure considering the outcome? As citizens, Pakistanis have paid 10 times over their health and education and what have they received in return except bloodshed, death and destruction?

8. Which other Army runs an economic business empire?

Pakistan Army is perhaps unique in the sense that it runs an economic business empire like no other Army in the world. It deals in all sort of businesses across the country, and perhaps that explains why they are so inefficient at the job we pay them to do – protect and defend us. An incomplete list of Pakistan Army business can be seen here but fan boys and girls kindly tell us which Army makes corn flakes, cement, ghee, shoes, oil guard and operates in over a dozen business like insurance, banks, real estate, CNG and fuel?

On 14 December 2007, Rashif Rauf one of the London 7/7 bombers mysteriously escaped from jail. Authorities say he escaped after freeing himself from handcuffs. Rauf was later killed in a US drone strike on Pakistan Army friendly terrorists on AfPak border.

Pakistan Army has been bombing Baluchistan for well over a decade now. They can kill and dump with impunity as and when they like with no questions asked. Journalists, students, activists, rebels, professionals – none is safe from their kill and dump job. They launched an operation on Mashkay earlier this year and wiped off the whole village. Did the Armed forces wait for, or at least ask for, a permission to do this from the elected Parliament? Have they ever waited for national consensus or go-ahead from Parliament to do their kill-job in Baluchistan? Why does this come in the way of a widespread operation against Jihadi terrorists?

11. Suicidal training madressahs at 200m from Army bases in FATA

Earlier this year, a suicidal terrorist training camp was discovered which stood only 200 meters away from a security base in FATA. Did it go unnoticed? Are the armed forces party to it or inefficient?

12. Which Army has to kills and dump journalists?

Saleem Shahzad, a journalist was killed and dumped by Pakistan Army for his work which leaked key information about Army’s links to terrorists. Does the Army not need to come clean on it?

13. Pakistan Army reports to none – why?

Pakistan Army and ISI is unique in a way that they operate completely independently, not controlled by anyone. They have resisted all attempts at putting them under civilian control, although as a state institution they are supposed to report to the elected Parliament but they operate with no control whatsoever. The security instituons drive Pakistan’s defence as well as foreign affairs policy. Army fan boys and girls may like to answer where else does this happen in the world?

LINK: An Anguished Afghan Mother Took Revenge by Killing 25 Taliban who Killed her Son, Truly an Example for Pakistan Army to Follow!

An Anguished Afghan Mother Took Revenge by Killing 25 Taliban who Killed her Son, Truly an Example for Pakistan Army to Follow!
The Pakistani Who Said It All After The Peshawar Attack
To Top