The US State Department has adopted some unconventional tactics to combat ISIS, the Islamic group making headlines recently for its onslaught against Iraqâ€™s government forces. Among the unlikely strategies adopted by the US appears to be online trolling.

Using a variety of tactics, both the US government and even groups loosely affiliated Anonymous are fighting back against the radical Islamic State in Iraq and Syria (now rebranded as simply Islamic State), which has swept through a large swath of northern Iraq in recent weeks. While politicians argue about the possibility of a military response and additional US troops have been deployed to bolster Iraqâ€™s military forces, a group at the State Department are attempting to combat the growing online threat of the radical group.

Using techniques that in any other context might be considered â€œtrolling,â€ the State Departmentâ€™s Center for Strategic Counterterrorism Communications is searching Twitter for users promoting the ISIS ideology, or urging others to join the jihadist group. Responses complete with graphic images are then posted to offer an opposing viewpoint counter to the narrative put out by the radicalâ€™s online strategists. 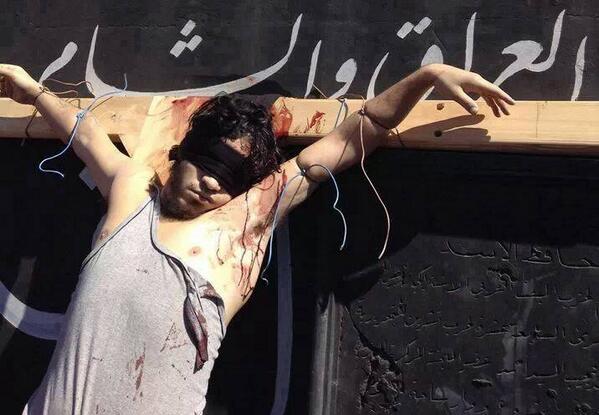 Since September 2011, the US has used this strategy to counter the recruiting of individuals by ISIS to fight in the civil war in Syria. With the spillover into Iraq now threatening to plunge the wider Middle East into conflict, however, their efforts are being ramped up.

ISIS increasingly uses what The Atlantic calls â€œa sophisticated social-media strategyâ€ to court potential jihadists, while also striking fear into the heartsâ€™ of the public. Using Twitter, near-professional grade videos and even smartphone apps, those behind the groupâ€™s online campaign have managed to exert a high amount of control over the messaging presented to the public.

Small retailers have even begun to capitalize on the messagingâ€™s success by selling and promoting ISIS branded merchandise through social media. Numerous outlets selling jihadist clothing, flags and other items have popped-up as the group becomes better known.

Itâ€™s not only t-shirts and balaclavas that are promoted through social media though.

Just a week ago in June, a polished recruiting video emerged claiming ISIS had enlisted members from Australia and the UK. Government officials were quick to use the piece of â€œpropagandaâ€ as an example of why Western nations should doing more to fight the terrorist group.

As violence in the Muslim world continues, they argue, more individuals may travel to the Middle East to train and fight, later returning home and bringing jihad with them.

Anonymous is also preparing an offensive to take on ISIS. Striving to hold the groupâ€™s financial backers accountable, sources inside the group told Forbes that the hacker collective will soon launch â€œOperation No2ISIS.â€

It is widely believed in the West that Saudi Arabia, Kuwait and other Arab states have supported the group that was started as an offshoot of Al-Qaeda in Syria and became famous for its violent tactics. Financial backing and smuggled weapons have helped ISIS to sustain its fight against the Syrian Air Force and an abundance of other rebel groups seeking to overthrow President Bashar al-Assad.

Named after the hashtag #NO2ISIS, which has been used by ISIS opponentâ€™s across social media, Anonymousâ€™ operation and its details largely remain a secret for now. The article speculates, however, that Distributed Denial of Service (DDos) attacks and social media hackings may be the prime methods used.